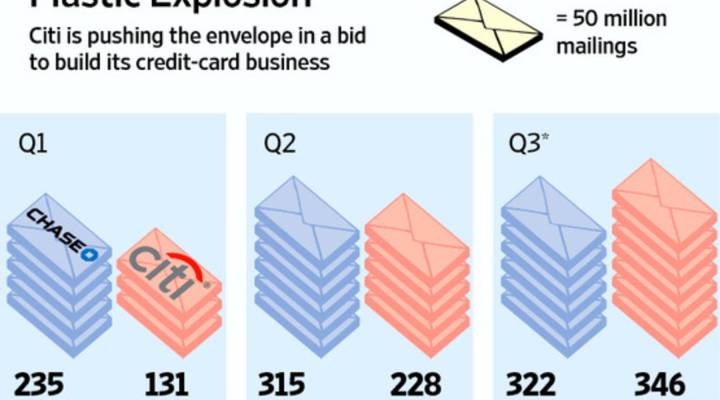 Now that’s good news, if you think that Americans will use credit cards to buy more stuff. That could juice the economy. On other hand, this is credit card debt we’re talking about. It’s the empty calories of the financial world. Load up on too much of it, and we could end up in real trouble. Again.

So good news, bad news, balancing each other out. That’s leaving the Marketplace Daily Pulse steady as a rock today.

Of course, credit card companies are offering more cards for a reason: to collect on fees. and the same report found that the average annual fee increased to $81 from $73 in July, reflecting more high-fee card issuance.

The Wall Street Journal reported that Citigroup is one the biggest mailers of solicitations. Amex, JP Morgan Chase and Bank of America do far more business than Citi right now, but Citi is racing to catch up.

Citi mailed an estimated 346 million card offers to North American customers in the third quarter, according to figures to be released later this month by Mail Monitor, a unit of research firm Synovate. That is more than one for every man, woman and child in the U.S. One in three credit-card offers that landed in consumers’ mailboxes last month came from Citi, Mail Monitor estimates.

The postal blitz is expected to make Citi the largest mailer of credit-card offers, ahead of longtime industry leader Chase, for the first time in eight years. It shows how Citi is trying to regain ground ceded to rivals after losing hundreds of millions of dollars on credit cards following the 2008 financial crisis.

Citi is trying to get people to switch to credit cards from debit cards. Debit cards are becoming less profitable for card issuers, thanks to a measure in the Dodd-Frank Act, so rates are rising on debit cards, creating an opportunity for credit card issuers to steal dissatisfied customers.

The WSJ reports this is a risky, expensive strategy for Citi. A piece of direct mail can cost upward of 70 cents, including postage, putting Citi’s direct-mail expenditures at more than $240 million in the third quarter. Acquiring customers through direct mail costs 10 times more than acquiring them through a branch network, which means Citi’s costs probably outweigh those of Chase, which operates five times as many U.S. branches.