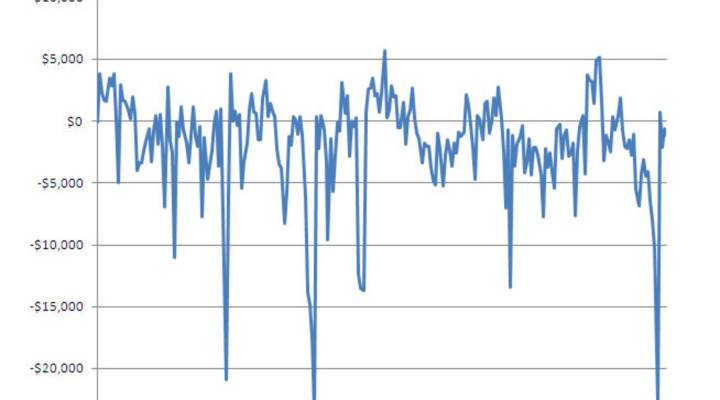 Money continues to flow out of the stock market. A report by Bloomberg News today cites research by the Investment Company Institute and EPFR Global reveals that investors have pulled roughly $75 billion out of equity funds since April. The news that equity outflows have now topped outflows in the five months following the collapse of Lehman Brothers made our hearts skip a beat, and drove the Marketplace Daily Pulse two notches lower today.

About $177.7 billion has been removed during the past 30 months from mutual and exchange-traded funds that invest in U.S. shares as the benchmark gauge for American equity rallied as much as 102 percent, before falling 17.9 percent through Aug. 8, Bloomberg reported. Investors pumped in $18.7 billion during the first four months of 2011, before removing about four times that amount since.

So where’s all that money going? A lot is going into bonds. Bloomberg aid bond funds added $42.3 billion from the end of April through July and started posting weekly outflows last month. Since the bull market began, fixed-income managers have received a net $666.4 billion.

The last time equity fund outflows exceeded $40 billion during a four-month period was in August 2010, the data show. The S&P 500, which completed a 16 percent decline the previous month, went on to gain 13 percent through November. Monthly outflows in the last two years exceeded $10 billion seven different times. The S&P 500 advanced the next month in five of those cases, according to Bloomberg data.