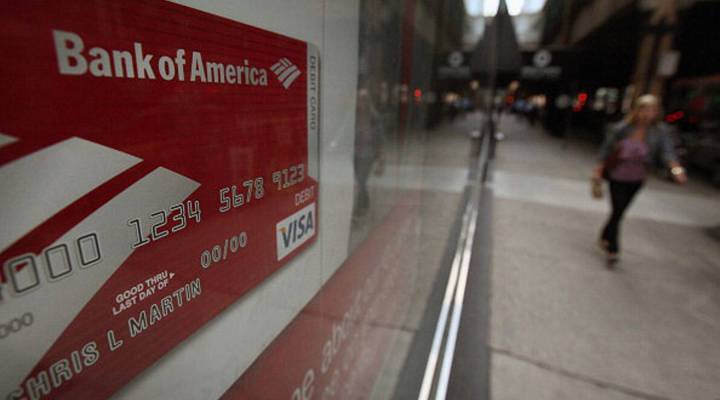 COPY
The window of a Bank of America branch on September 12, 2011 in Chicago, Ill. Scott Olson/Getty Images

The window of a Bank of America branch on September 12, 2011 in Chicago, Ill. Scott Olson/Getty Images
Listen Now

A report today from the good people at Nielsen shows everybody from car makers to cell phone companies spent $53 billion on TV, radio and print ads in the first half of this year. That’s up 5 percent from a year ago.

And get this: After black eyes from the financial and foreclosure crises, bank ad spending was up 24 percent this year, trying to get us to sign up for credit cards and checking accounts.

Stacey Vanek Smith: Unemployment above 9 percent, a whip-sawing stock market — in the middle of it all, banks spent half a billion dollars advertising products like credit cards, and another half billion trying to convince customers to invest with them.

Bart Narter: One is the stripped-down offer for customers who don’t want the complexity.

TD Ameritrade ad: Maybe it’s time to get back in the market, but different this time — with more control and more freedom.”

The “you can trust us” approach. The other tactic, says Narter?

Capital One ad: They’ll match the miles you’ve earned on your airline credit card, up to 100,000.

The “show me the money” approach. Ron Shevlin is a banking products analyst with the Aite Group. He says banks are trying to shake their bad rap from the financial crisis.

Ron Shevlin: A lot of the ad spending now is driven on rebuilding their image and their reputation in the marketplace.

As for the rich rewards? Shevlin says with profits sliding, banks are battling it out over a small pool of wealthy, credit-worthy customers.

Bill Carroll: When the economy is sluggish, you need to put a fire under the consumer. And the best way to do that is by advertising to them.

Carroll expects we’ll continue to see more ads about what’s in your wallet through next year.