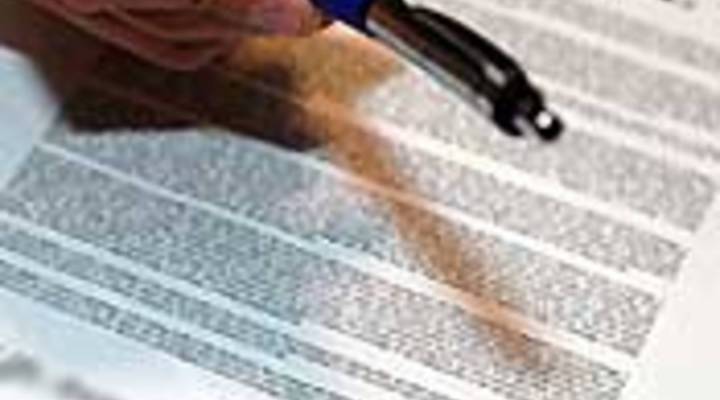 The nation’s trade deficit shrunk in July by more than expected after the U.S. sold more goods to Latin America.

Fixed mortgage rates fell this week to the lowest levels in decades: 4.12 percent. But few Americans can take advantage of the rates to refinance or buy a home.

The outlook for economic growth in developed countries has got much worse in the last three months, the OECD said on Thursday and urged central banks to keep rates low and be ready to pursue other forms of easing.

Smithfield Foods beat Wall Street expectations as the company benefited from higher prices for its live hogs and packaged meat.

Officials in northeastern Pennsylvania are calling for a mandatory evacuation of all communities due to expected flooding along the Susquehanna River – an area that was inundated in the historic Agnes flood of 1972.

Wildfires have destroyed nearly 1,400 homes in Central Texas where firefighters have been battling to get the blazes under control for days.

Fitch Ratings says credit risk in China has increased because too many loans have been taken out by local governments.

Reuters is reporting that Facebook’s revenue doubled in the first half of 2011 to 1.6 billion dollars. That comes from an unnamed insider. Facebook won’t officially comment on that figure.

The European Central Bank slightly changed course on interest rates. After raising them during the summer – they held steady this month, with concerns about a big economic slowdown, the Bank of England has held its base interest rate at an all-time low of 0.5 percent.

Then, two notable items from this week’s firing of Yahoo CEO Carol Bartz. First of all, she was fired over the phone, which just seems wrong — you don’t break up over the phone, then you shouldn’t fire someone by phone. But perhaps more interesting was her post-firing email to the entire Yahoo staff. The last line of the email is: sent from my iPad. Maybe she’s in line for a job at Apple?

Officials at the Federal Reserve Bank in Baltimore say they’re running out of storage room for $1 coins. A 2005 law requires the Fed to order the coins, which a lot of people don’t use. And earlier this summer, the Fed reported to Congress it amassed more than $1.2 billion of them at its branches across the country, including Baltimore. A note to the Fed: in this economy, I’m gonna guess there are plenty of people who would love to store some of those burdensome coins.

Trade talks in Beijing didn’t didn’t get much traction. What does that mean for China-U.S. relations?