Jeremy Hobson: Now to the troubles at the cash-strapped U.S. Postal Service. As it tries to cut its costs it’s also asking its outside contractors to cut. The Postal Service spends $15 billion a year with contractors and it wants to bring that number down
by a billion.

David Gura: The U.S. Postal Service has outsourced for a long time.

Hendel: Mail that goes any kind of a distance at all has been contracted out from time immemorial.

To some familiar companies, making hundreds of millions of dollars, every year: FedEx and United Airlines, Northrop Grumman and IBM. Some of them transport mail. Others help it track and sort it. Hendel says some of those contracts may not be renewed.

Hendel: As the Postal Service contracts, it’s buying less of everything.

And it’s asking companies to consider lowering rates, to cut costs where they can. The Postal Service is asking for sympathy. But Hendel says the USPS will always rely on contractors. It’s cheaper, and it doesn’t have to worry about retirement or health care benefits. 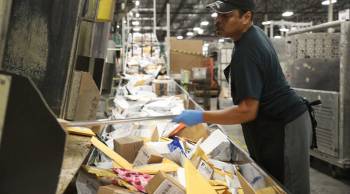 Amazon and its rivals are teaming up to keep the U.S. Postal Service the way it is