Ex-cons in Missouri get help with job placement

Ex-cons in Missouri get help with job placement

Steve Chiotakis: New sentencing guidelines mean up to 12,000 inmates around the country will be eligible for early release. And that means more people looking for work in a strained job market.

From St.Louis, David Weinberg reports on some ex-cons who may actually have an advantage.

David Weinberg: In St. Louis, your chances of getting a job are better if you have served time in prison. The unemployment rate in Missouri is 8.7 percent — but for former inmates, it’s 7.9 percent, according to figures from the U.S. Probation Office.

David Kessel: In our opinion, employers that make a decision to hire formerly incarcerated individuals are really smart employers.

David Kessel is the chief operating officer for Employment Connection. It’s a St. Louis-based nonprofit that helps former inmates find stable employment. Kessel says one advantage to hiring former convicts is the $2,400 federal tax credit that companies get for every ex-offender they bring on.

When the new sentencing guidelines go into effect, nearly 200 inmates in St. Louis will be eligible for release. Many of them will end up in this classroom.

Teacher: Chronological resume is moreso for people who tend to have a large number of jobs in a small amount of time.

On a recent afternoon, roughly 40 people are attending this training class. Across the hall in the resource center, half a dozen ex-offenders are using computers to look up job listings.

Carl Washington: Getting out of jail and trying to find a job, it’s not going to be easy. It’s really not. It’s going to take from you a willingness to let go of the ghost that’s going haunt you, telling you that can’t do it because of this felony that you got.

Carl Washington served time for fraud and he is one of Employment Connection’s success stories. He recently landed a job working as a banquet server for hotels. David Kessel says if Washington stays employed, he is two-thirds more likely to stay out prison. And that would save Missouri taxpayers a lot of money.

The new sentencing guidelines are expected to save the federal government $200 million in prison expenses in the first five years — but only if the inmates who are released stay out of prison. That’s why several local governments around the country are looking at Missouri’s success in keeping ex-offenders out of jail and fully employed. 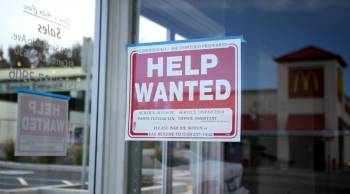