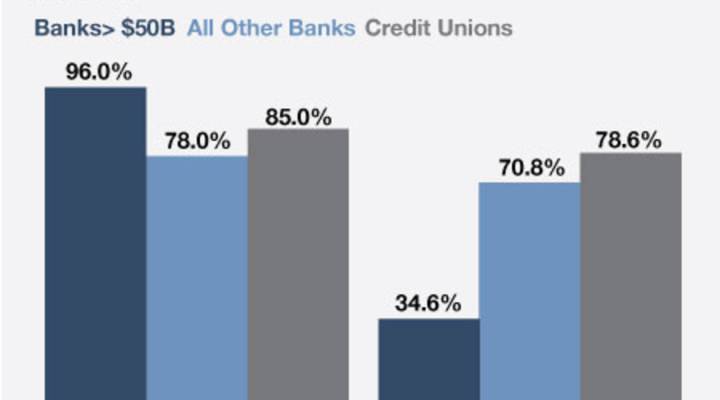 No more land of the free?

No more land of the free?

Want free checking? Don’t go to a big bank. A report from Moebs Services, which tracks banking activity, says the number of big banks offering free checking accounts has dropped to 34.5 percent, from 96 percent in 2009. The news that it’s costing Americans more to use banking services pushes the Marketplace Index down a point today.

Charging for checking accounts is “just not going to be possible for us. … We’d lose the accounts,” James Maloney, Chairman of Mitchell Bank in Milwaukee, told the American Banker. The Banker says free checking is still alive and well at most banks and credit unions with less than $50 billion worth of assets.

Of course, free checking isn’t free: someone has to pay for it, as Felix Salmon observed in a post last year.

…in recent years banks have been able to conjure the illusion of free through a system of regressive cross-subsidies, where the poor pay massive overdraft fees and thereby allow the rich to pay nothing.

Checking accounts pay zero interest these days, but even being able to borrow money for free from depositors isn’t worth $300 per year to a bank. If a checking account has $1,000 in it on average, and the bank can lend that money out at 7%, net of defaults, then it’s making $70 a year on the account, which isn’t enough to cover its costs.

The natural answer, here, is to restart charging monthly fees on modest-balance checking accounts — and to shed few tears when your low-balance customers leave.

The free checking picture is a little more nuanced than Moebs might have you believe, because of the banks’ varied offerings on the tier of checking accounts that they provide. I called up Chase this morning, and discovered that while your plain vanilla account costs $10 a month, you can avoid the charge by holding a minimum balance or using direct deposit. The higher you go up the tier, the higher the monthly fee, but again, you can avoid the fee altogether by holding the minimum balance.

So I guess checking is still free, even at the big banks, but only if you can afford to pay for it.