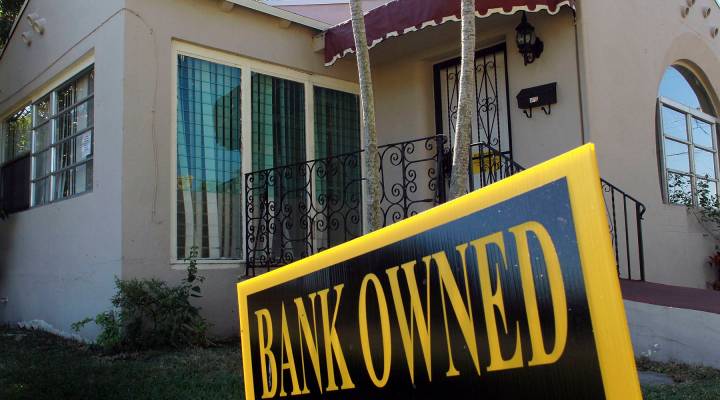 COPY
A bank owned sign is seen in front of a foreclosed home on December 7, 2010 in Miami, Fla. Joe Raedle/Getty Images
Maps: Housing

A bank owned sign is seen in front of a foreclosed home on December 7, 2010 in Miami, Fla. Joe Raedle/Getty Images
Listen Now

Kai Ryssdal: In New York today, there was a trip back to the mortgage mess of yesteryear. State regulators announced a settlement with Goldman Sachs for some of the sketchy practices that contributed to the housing crisis: shoddy paperwork and foreclosure robo-signing by the tens of thousands.

Marketplace’s Stacey Vanek Smith reports the settlement amount is relatively small, its implications, though, are anything but.

Stacey Vanek Smith: Goldman Sachs and two other firms agreed to stop robo-signing, which they were already supposed to have done anyway. Goldman also agreed to lop 25 percent off the home loans amounts of some New Yorkers who are delinquent on their mortgage payments — that will cost Goldman about $50 million.

Levitin says banks have been willing to help struggling homeowners by cutting the interest rates on their loans, but have resisted reducing the principal amount owed.

This case could break that resistance. John Coffee directs center on corporate governance at Columbia University.

John Coffee: I think it will be a template. Much of the rest of the industry is looking for some kind of form settlement that they can agree to.

More states are pursing their own cases against mortgage companies. Harvard housing economist Nicolas Retsinas says the banks would prefer one big settlement — including state and federal regulators — but that might not happen since federal regulators don’t want to impose fines big enough to cause another banking crisis. And, he says, settling state-by-state isn’t great for the housing market either.

Nicolas Retsinas: What this market most suffers from right now is uncertainty — it never seems to end. Problems continue to dribble out.

Federal regulators are taking some action. Today, the Federal Reserve also ordered Goldman to review its loan servicing practices, adding it to 14 other big banks that are likely to face fines.

Maps: Housing
Tags in this Story
Share this Story