Jeremy Hobson: The University of Southern California is launching a campaign to raise $6 billion in the next several years. That would be a record for college fundraising. So why does USC think it can happen in this economy?

Amy Scott: With the market swinging around and the economy looking gloomy, this may not seem like the best time to ask donors for large handouts.

But Patrick Rooney with the Center on Philanthropy at Indiana University says it’s good to be first in line when things get better.

Patrick Rooney: As the economy grows, typically philanthropy grows, and so to get out in front and to have a big bold vision and a big bold campaign probably has some advantages in the marketplace.

USC has already raised $1 billion in the early, so-called “quiet phase” of its campaign. Al Checcio is senior vice president for university advancement. He says the key is to figure out what interests wealthy alumni, and then connect them with programs they’re excited about.

Al Checcio: That is really the science and skill of fundraising. Through the course of that relationship, you determine what they’re interested in, and then in many ways, it’s almost like being a matchmaker.

Checcio says half the money will go toward building the university’s endowment to help attract big-name faculty and provide more scholarships.

USC’s endowment lags many of its peers’. A larger pool of money would also help the university ride out the ups and downs of the economy. 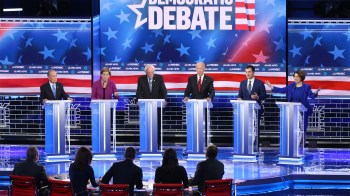