Tess Vigeland: After years of declining sales, one comic book publisher is hoping to attract new fans by doing the equivalent of spinning-the-earth-in-reverse in the land of superheroes. DC Comics is remaking its 52 titles with entirely new looks and storylines. And tomorrow, it releases the first issue of the redesign.

Our very own Lois Lane, also known as Marketplace’s Jennifer Collins, has the story.

Jennifer Collins: To get an idea of how dramatic this change is — DC Comics co-publisher Jim Lee says — just check out Superman.

After 70 years, someone finally told the Man of Steel they call it “underwear” for a reason. Batman, Wonder Woman, the Green Lantern — every one of the characters in DC’s lineup is getting a makeover as well, and issues will begin at No. 1.

Lee: We want to make this generation of readers feel this is is their version of DC Comics. These aren’t the characters or storylines that my parents or grandparents collected.

Joe Field is the president of a trade association for comic retailers.

Field: This is a hugely bold move that I haven’t seen in my 25 years in the business.

Field says the industry could use a revival. Sales have fallen nearly 10 percent from peak revenue of more than $700 million. But, for loyal readers, he says the move could be kryptonite.

Field: DC Comics has a lot of fans that really would be put off by a total starting over.

Field: Unfortunately the studios don’t have tags on the end of the movies that say the next step for you is for you to go into your local comic shop.

Dave Pifer runs a local comic shop in Los Angeles called Secret Headquarters. It’s no secret most of his customers are in their late 30s or 40s, and sales of comic books at stores like his have been declining steadily.

Dave Pifer: I think there’s been kind of a lack of excitement, which is really hard to put a finger on because a lot of the comics are still so good.

They may be page-turners for older fans, but Pifer says newer fans have trouble getting into often long and convoluted storylines.

John Jackson Miller, who tracks the comic book industry, says there’s one way to change that.

John Jackson Miller: Whenever you put an issue No. 1 on a cover, sales do go up dramatically.

Miller says a small relaunch in the ’90s helped another comics publisher, Marvel, boost sales and eventually Hollywood’s interest in the Iron Man series. Marvel has relaunched a few other titles as well. DC’s move is much bigger.

DC co-publisher Jim Lee hopes the top-to-bottom makeover will inject energy into some of his lesser-known characters.

Lee: Some of the ones I’m excited about personally are like Aquaman. You know, Aquaman has never had a great look — you know orange and green, probably not the most iconic color scheme out there. We tried to make him more royal, powerful and epic I guess.

DC’s also planning aggressive releases of its comics digitally. And Lee expects sales to climb at least 15 percent — the trouble will be keeping those sales growing.

Lee: Ultimately we have to show them really awesome storylines. No costume change is going to make a bad story a good story.

Now, if only they could come up with answer for why no one recognizes Clark Kent without his glasses.

See more pictures from DC Comics’ relaunched characters and let us know what you think of the changes. Read the blog post. 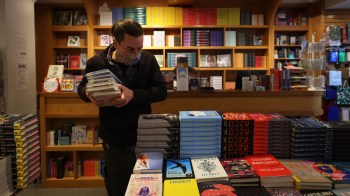