Jeremy Hobson: The head of Libya’s rebel government says
the rebels could lose the trust of the people if Western governments don’t release billions of dollars worth of Muammar Gaddafi’s frozen assets, and fast. But at this point, Gaddafi himself remains at large, so countries and businesses around the world are left wondering what to do.

Hobson: Lord Owen, back in April, the so-called BRIC countries — Brazil, Russia, India and China — came out and denounced the use of force in Libya. Are they in trouble now as countries start to recognize the rebels, and want to do business with them.

Owen: I think all those skeptics about the use of a no-fly zone to tilt the balance of fighting have got egg on their face. And I think this is a source of interventionism that we’re going to have to get used to — I’ve called it a “constrained intervention.”

Hobson: When you are a country who does business with Libya, how do you figure out what to do in a situation like this where you don’t know what’s going to happen with the leadership, but you do want to have an economic future with the country?

Owen: Well I think that in the early days, you hedge your bets and you keep on board with the existing government. I don’t think business is there to make political judgments; they’ve got to have their eyes open and be aware of what may happen in the future, but try and keep open an dialogue with the liberating and protesting element.

Hobson: And then once it looks like one side is going to emerge, as it does right now, how does the dynamic change? What are you supposed to do at that point?

Hobson: When you were foreign secretary, did you ever deal with a situation like this where you had one government changing over very quickly to another and you had to adjust your policy toward that government?

Owen: When I inherited a situation where Southern Rhodesia was in so-called “rebellion against the crown.” We had an Anglo-American plan to try and peacefully negotiate a settlement. But as of course we all know, Robert Mugabe, having done an initial reconciliation, then led his country into total chaos. It’s a tragic story.

Hobson: What did you learn from that situation?

Owen: That personalities really matter. When I came to the conclusion actually he would not make a good future prime minister, it was not for my — mine to make the choice, but I certainly tried to engineer a process where he would not become prime minister. But at the end of the day, the people spoke, and they voted for him and we had to live with that.

Hobson: How prepared, do you think, these Libyan rebels are to take over the country and its economy?

Owen: I think they’re very prepared. I think we’re underestimating them. The transitional team began to develop more coherence, spoke to other countries, developed sensible proposals, came out with a constitution, made the decision that none of them would stand for election — which is crucially important in a transitional period — and pledged themselves to have an election in eight months. Now, if they can achieve that, that would be a fantastic transition.

Hobson: Former British Foreign Secretary Lord David Owen. Thank you so much for joining us. 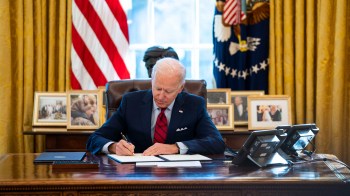