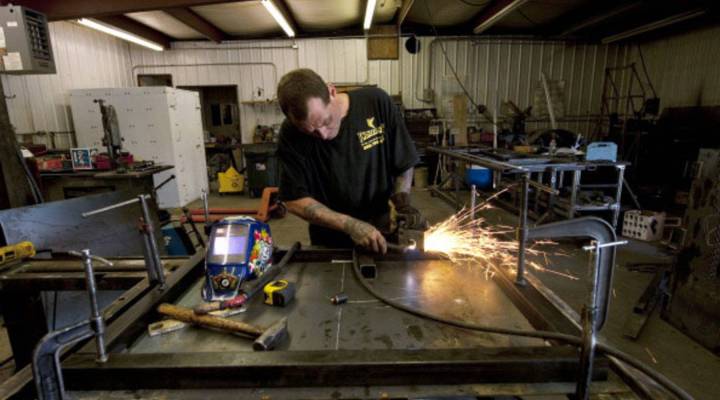 Jeremy Hobson: So far, 2011 has turned out to be a very tough budget year for states — even by the standards of the last few years. The combination of a soft economy and the end of federal stimulus programs has left states with no choice but to cut back on some key services.

In Missouri, lawmakers are weighing cuts to a program that provides tax credits to refurbish historic buildings. And As St. Louis Public Radio’s Adam Allington reports, some are concerned that ending those credits will lead to even more job cuts.

Adam Allington: Developer Craig Heller has been rehabbing historic buildings since the late ’90s, and his fingerprints are all over downtown St. Louis. On a recent afternoon, Heller points out one building after another he’s restored.

Craig Heller: Well this is the Farm Home building, originally built by Kinloch Telephone back in 1907.

Now home to a bike-commuter station and restaurant.

Heller: And then across the way is the Syndicate Trust building from 1905.

Today, seven floors of luxury condominiums. Heller’s business took off after the state introduced a tax credit to reimburse one-fourth of the cost of historic rehabs. His company has refurbished more than a million and half square feet of office and warehouse space. And across the state, the tax credit’s reportedly generated more than $2 billion in economic development. But now the Missouri Legislature may cut the program, and for Heller, that’s a deal-breaker.

Heller: If you’re not sure if you can get those credits, the last thing you want to do is buy a building and then be stuck with it.

No surprise a developer would like development tax credits. But cities also like the program because it puts vacant properties back on the tax rolls. And not too long ago, politicians of all stripes praised the program as a job creator. Since 1998, the state has spent a half-billion dollars on the tax credits. But the program’s now run smack into the political drive for budget austerity.

Gov. Jay Nixon used to support the tax credits, but now he wants to divert that money to other programs.

Nixon: We’re 35th in K-12 funding, we’re 45th in per capita funding for higher education. We can change that.

Supporters of historic tax credits counter that every penny the state spends comes back four-fold just in sales and income tax.

Donavan Rypkema is director of Place Economics, a real estate consulting firm based in Washington D.C.

Donavan Rypkema: I understand the need to say we got to watch state budgets and we’re in economic trouble and tax collection is down, I got all that. But underlying it all, we need jobs and this is creating jobs and creating them in Missouri like nothing else in that state is doing.

Rypkema says historic tax credits provide more bang for the job-creating buck. Taxpayers are only on the hook for 25 percent of the cost to rehab historic buildings compared to 100 percent for new highway and road projects.

Still, Missouri’s unemployment rate has been roughly 5 percent or more for the last 10 years. Luann Ridgeway is a Republican state senator from Kansas City.

But some say the state is sending mixed messages. At the same time they’re looking to cut historic tax credits, lawmakers are expected to offer hundreds of millions in tax relief for airport upgrades and incentives to encourage the growth of data centers in Missouri.