Stacey Vanek Smith: Yesterday it seemed victory was at hand for Libyan rebels. Today, the situation looks a lot dicier. One of Colonel Muammar Gaddafi’s sons has reappeared and rebels have retreated from parts of Tripoli.

George Joffe is a research fellow at Cambridge University Centre of International Studies. He joins me now. Good morning, George.

Smith: The Libyan rebels seemed to have been victorious yesterday, although today that’s looking less sure. How does that effect the current situation in Libya?

Joffe: That depends, really, on for how long it lasts. If control of Tripoli is made quickly, then it probably won’t have a lasting effect. If it persists, and the city is divided, then I think there are going to be disastrous consequences. But, putting that to one side and assuming that in fact, the conflict will wind down in the next fews days then the major problems that the new authorities are going to face is the way in which they’re going to restore the economy of Libya — particularly the oil industry, because without that, there isn’t going to be funding to pay for the reconstruction that’s going to be necessary.

Smith: Obviously, Libya has a lot of oil. Does the presence of oil make it more difficult, or less difficult, to reconstruct, to build an economy. Obviously there is a lot of money there, but also a lot of competing political interest potentially?

Joffe: Well the problem is that the money is there, but it’s frozen. So the first problem that the authorities are going to face is how are they going to unfreeze it. But they’ve got an even more important short-term problem. And the immediate short-term problem is going to be: how are they going to guarantee security for Libyans? Quite apart from Tripoli, there’s still resistance in the center of the country, and that could be very difficult to reduce.

Smith: Speaking of political conflicts, we’ve been hearing a lot of comparisons to Iraq in the last few days. Is that a fair comparison? Is Libya potentially facing the same issues that Iraq has.

Joffe: No I don’t think so. If you remember, the problems in Iraq arose because the way in which the Saddam Hussein regime was destroyed — by an external intervention. Now that’s not been the case in Libya. There have not been foreign troops on the ground — indeed, they’re expressly forbidden. Libyans can now with full soverignity take control of their own country. That means the problems that would arise would be purely internal, and that will be quite unlike the situation in Iraq, where there was an external target for the insurgents to direct their anger against.

Smith: George Joffe is a lecturer at the department of politics and international studies at Cambridge University. George, thank you so much for joining us.

Oil companies may be able to solve supply, but what about demand? 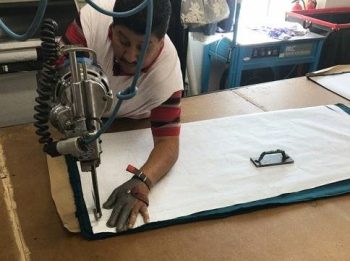