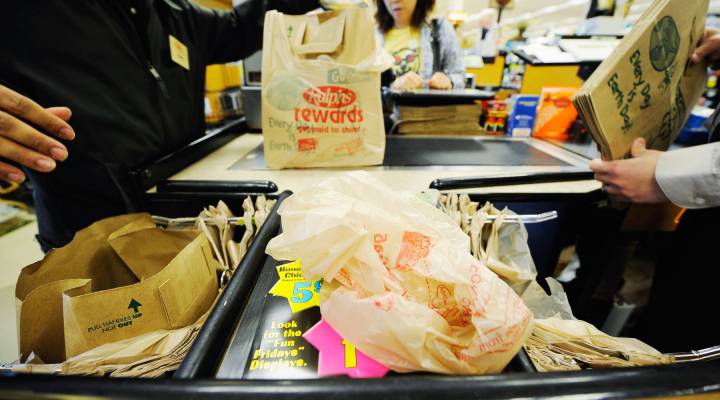 15 percent of Americans are on food stamps

15 percent of Americans are on food stamps

Customers of Ralphs supermarket use plastic bags to carry their groceries home on October 25, 2011 in Glendale, Calif. Kevork Djansezian/Getty Images

The people who have to resort to government help often have jobs. But the jobs they have often don’t pay enough to support a family. The story profiles Genna Saucedo, a Wal-Mart employee who earns $9.70 an hour for about 26 hours a week. That’s about $1000 a month to support her, her mother and a 12-year-old son. And she’s not full time, so she gets no benefits.

I recently read Nickel and Dimed, by Barbara Ehrenreich, who Tess Vigeland will be talking with on Marketplace Money in the next few weeks. Ehrenreich makes it clear that the real killer for poor people is rent, which gobbles up so much of an employee’s pay that there’s hardly anything left to live on.

To test this, I did a quick search of rental properties in Pico Rivera, California, where Ms Saucedo lives, and I could not find anything for less than $750 a month. And that was for a studio apartment. Ehrenreich says a lot of people live in motels. I couldn’t find one for less than $45.99 a night. That’s $1350 a month.

I can’t imagine trying to feed a family of three on the $9 a day that would be left if I rented that studio. Saucedo told Financial Post that plenty of her colleagues are in the same situation.

So are her customers. Bill Simon, head of Wal-Mart’s U.S. operations, told a conference call last Tuesday that the company had seen an increase in the number of shoppers relying on government assistance for food.

But hey, this is America – they can always borrow!