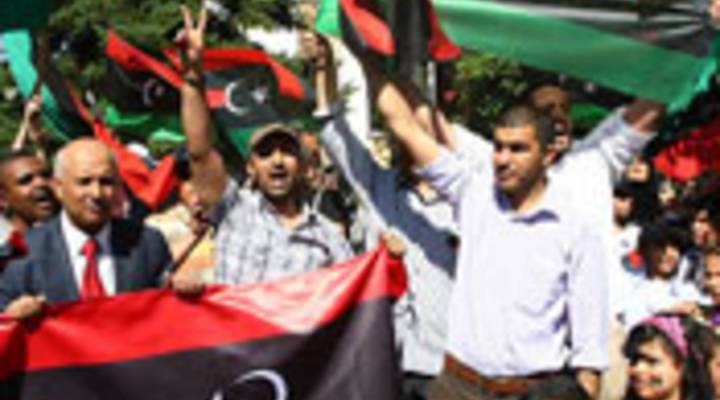 Anticipation of Libyan oil coming on to the market is expected to push crude prices down. Oil’s at about $83 a barrel this morning and was already getting cheaper because of worries about an economic slowdown in Europe and the U.S. that would reduce global oil demand.

The European Union will keep sanctions in place against the Libyan government for the time being but is ready to lift them quickly when the time is right, the E.U. executive said on Monday.

Investors are going to be trying to read the mind of U.S. Federal Reserve Chairman Ben Bernanke ahead of a Friday speech in Wyoming. They are rumors out there that he might announce new plans to goose the economy, trying to keep the country out of another recession.

Hopes of settling some of the legal issues surrounding foreclosures have hit a snag. At issue is whether the banks would get legal immunity from state officials for mortgage-related claims. Federal and state officials are seeking penalties of $20 billion and more from Bank of America, JP Morgan Chase and other firms.

A new survey of economists finds more of them are against tax hikes as part of deficit-cutting efforts. The survey by the National Association for Business Economics finds that 56 percent of the members surveyed feel that way, while 37 percent say they favor equal parts spending cuts and tax increases.

The airline United Continental will spend $550 million to add more overhead storage and improve seating on some of its planes.

In Japan today, government officials said residents evacuated from homes near the Fukushima nuclear power plant may not be able to return for a long time — perhaps decades according to reports.

The King is dead! Burger King is dropping its king mascot. You know, the one with the over-sized plastic head and the big smile. BK says it’s going to focus more on the freshness of its food to appeal to mothers and healthy eaters and focus less on the creepy grinning king. I don’t know why that wasn’t selling burgers.

A runaway cow has been evading authorities in Germany since May. The 1,500 pound dairy cow has been hiding out in the woods. According to the Daily Telegraph, locals are going high-tech to find it. Using everything from scooters to sniffer dogs to helicopters with thermal cameras. No luck. Now they’re back to basics: One searcher told the Telegraph, “We have found cowpats, very fresh ones. And we will follow the trail.”