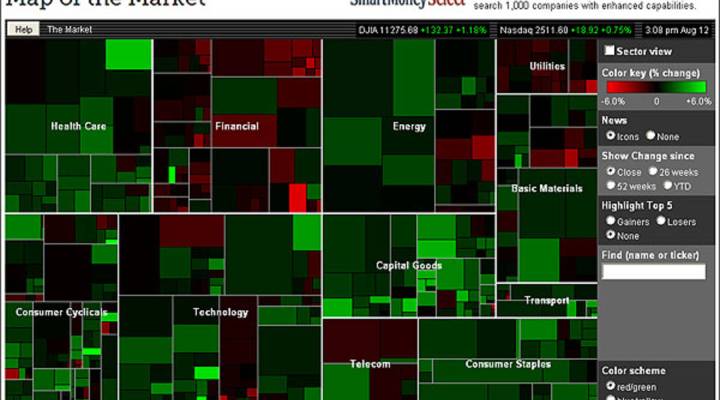 Taking stock after a wild week

Taking stock after a wild week

That bright red pain point in the center of this map of the market? That’s Morgan Stanley. It lost more than 7 percent in trading today.

Fortunately, financials are not the whole market, which ended higher today. The S&P 500 was up a half of 1 percent, and the Dow was up more than 1 percent.

But the retail sales numbers said that at least some Americans are shrugging off their worries about the economy and hitting the malls. Those shoppers spent more on gasoline, electronics and other merchandise in July. It wasn’t a huge increase, but in this economy, any increase in spending is a good sign. So, good news.

As for “lighter volume,” all that means is there weren’t as many investors buying and selling stocks as earlier in the week. A lot of market players are hanging out on the sidelines right now, waiting for things to settle down before they get back into the game.

So, after a week of wild swings in the market, where are we? Only about 1 percent lower than where we were this time last Friday! During the rout of the first half of this week, you could have been forgiven for thinking that our economy was about to implode. The fact that it didn’t is not to say things are all rosy in America. Unemployment is still stubbornly high; the housing market is still in terrible shape, both the country and many of its citizens are still staggering under way too much debt. All of this means that the economy is fragile, and the markets are susceptible to shock. We may see a lot more market turmoil in the coming weeks and months.

***During this time, Marketplace will examine the disconnect between the markets and the economy. Every day, we’ll report on the divide between Wall Street and Main Street, and on what’s being done about it. Follow our up-to-the-minute coverage of the markets and economy in our special section and blog Market Mayhem/Economic Standstill. ***