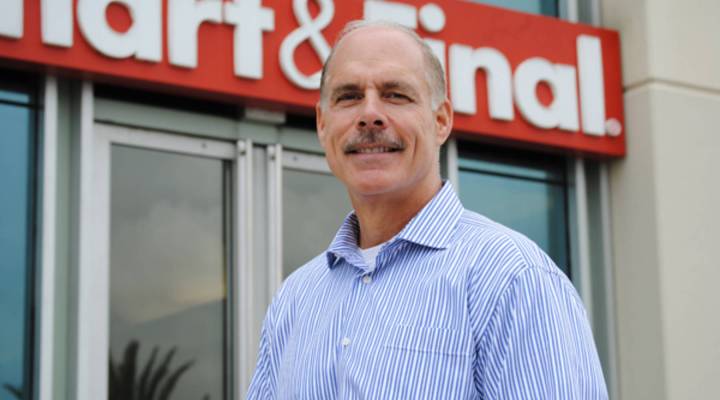 Kai Ryssdal: The idea we had when we decided to come down here to Commerce was to go from small business to large with a stop along the way in the credit markets to see how the downgrade and Wall Street — and mostly the real economic weakness that’s out there — are being felt. So we had Vincent and his small business from across the street.

Dave Hirz’s business is also based here. But it’s a big-name company. He’s the president of the warehouse grocery store chain Smart & Final. If you’ve ever stocked up maybe for a party or big to-do needing snacks and drinks, you’ve probably shopped there. Dave, thanks for coming by.

Ryssdal: So I said retail in a reluctant economy. Is that what you’re seeing?

Hirz: I am. But really, on the Smart & Final side of the ledger, sales are actually very good.

Ryssdal: How good? Are you setting records?

Hirz: We’re setting records. In fact, in the months of June and July we had three record weeks within a five-week period.

Ryssdal: All right, not to be a downer here. But after good things, bad things do come. What are you ready for? What are you expecting the second half of the year?

Hirz: We actually have re-forecasted the second half of the year and it’s a far more optimistic than our original projection. In fact, right now we’re putting together our business plan for 2012 and we’re optimistic going into 2012.

Ryssdal: How can that be? What’s going on at Smart & Final that you’re not feeling this?

Hirz: We’re a little unique. We have about 234 stores and we see about a million-and-a-half customers every week. But a third of those are small businesses, small restaurants, veterinarians — people that come to us for our large sizes, that type of thing. About two-thirds are household customers. So we see different things there. The business customer, in particular, has been in our mind feeling much better here in the last six months than before. The household customer — we’re a EDLP, everyday low price operator — and people are looking for price and we think that that’s why we’re growing.

Ryssdal: So are we getting into a situation then where you guys in the EDLP category — which is a new phrase for me, never heard of that — you guys are doing well and the really high end is doing well, and people in the middle are getting squeezed?

Ryssdal: Yeah. So let me ask you this, I had the CEO of GM on the phone the other day — we’re going to run that interview in a couple of weeks — and I said to him, you’re running a major industrial company in this country, how do we get out of this? And so I put now the same question to you — different business category, same fundamental question.

Ryssdal: Are you doing so well that you’re expanding and hiring?

Hirz: Oh we are definitely hiring. With the kind of sales growth that we have — pushing double digits — we’ve definitely been hiring all year long this year and plan to do additional hiring in the future.

Ryssdal: The president met with CEOs either yesterday or the day before, I forget, talking specifically about jobs and what the government can do. What do you want to see? What do you think policy ought to be that’s going to get more jobs into this economy?

Ryssdal: Yeah, but very quickly, how do you create jobs if you’re President Obama?

Ryssdal: All right. Dave Hirz, the president of Smart & Final. Thanks so much for coming out today, Dave.