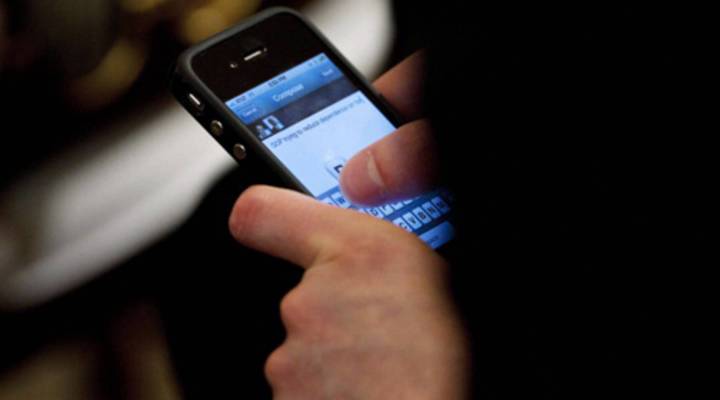 COPY
An audience member uses an iPhone to send a tweet during an online Twitter town hall meeting with U.S. President Barack Obama from the East Room of the White House July 6, 2011 in Washington, D.C. Brendan Smialowski/Getty Images

An audience member uses an iPhone to send a tweet during an online Twitter town hall meeting with U.S. President Barack Obama from the East Room of the White House July 6, 2011 in Washington, D.C. Brendan Smialowski/Getty Images
Listen Now

Kai Ryssdal: I mentioned the Societe General rumor on the way into Stephen’s piece — he talked about it — and you might think that’s overkill. But fact is, rumors have been flying this week — about everything from the Federal Reserve’s next step to the strength of the Swiss Franc. And as SocGen shows, those rumors have teeth: shares of the bank dove more than 15 percent yesterday, got some of it back today.

This morning, Reuters published and tweeted a story about how, again, as Stephen mentioned — but that’s how rumors get started, isn’t it? — that one Asian bank had stopped lending to the French, rumor had it, citing only anonymous sources. That hit the markets hard and does make one wonder if maybe information’s moving too fast.

Stacey Vanek Smith: Joshua Brown is vice president of investments at Fusion Analytics — and a big presence on Twitter.

He says Twitter is the main way he gets his information.

Brown: I’ve canceled my subscriptions to all the regular news sources because I’m kind of crowdsourcing instead, and I can see what’s affecting the market by what other traders that I follow and other journalists that I follow think is important.

Brown says rumors do fly, but a critical mass of Tweeters can quash false statements quickly — but not quickly enough for Paul Kedrosky. He runs a hedge fund and has more than 160,000 Twitter followers. He says a Twitter rumor can get enough traction to move the markets before the truth comes out.

Paul Kedrosky: Where if something gets repeated often enough, even if it’s not true. Then you do have people change behavior.

Kedrosky says that’s especially the case in a volatile market, because people are desperate to stay ahead of the herd. And, he says, you don’t always know where you’re getting your advice.

Kedrosky: There’s a weird, false intimacy created by Twitter, where people feel like you know them because I see them tweeting all day long and I’m like: ‘Oh I know you had hamburgers and you’re short the Swiss Franc. Great! I trust you.’

And knowing who to trust is the real difficulty in the age of Twitter and texting and emails and blogs, says Rice Trader’s Jeremy Zwinger.

Jeremy Zwinger: Yes things are faster, but you also have to find the truth. It’s almost overwhelming. And you have to build a filter.

Because the Wall Tweet rumor mill is likely to keep getting bigger.