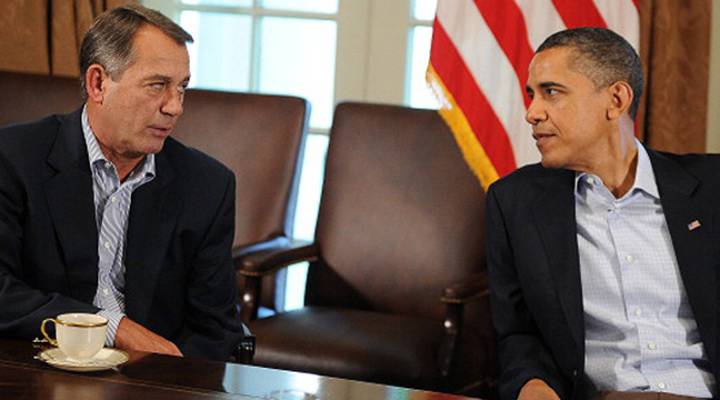 The downgrade: What political gap?

COPY
U.S. President Barack Obama speaks with U.S. Speaker of the House John Boehner during a meeting in the Cabinet Room at the White House in Washington, D.C., on July 23, 2011. JEWEL SAMAD/AFP/Getty Images
Debt Downgrade

The downgrade: What political gap?

U.S. President Barack Obama speaks with U.S. Speaker of the House John Boehner during a meeting in the Cabinet Room at the White House in Washington, D.C., on July 23, 2011. JEWEL SAMAD/AFP/Getty Images
Listen Now

Kai Ryssdal: Let’s take a step back and retrace the steps that got us to AA+. From New York, Marketplace’s Stacey Vanek Smith starts us off.

In its statement (pdf), S&P said it doesn’t think Congress will be able to bridge the political gap and do what needs to be done to reduce the deficit. And a lot more needs to be done, says Michelle Meyer, senior U.S. economist for Bank of America, Merrill Lynch.

Michelle Meyer: In order to have a true plan for fiscal austerity, it has to address Medicare and Medicaid and also tax reform.

Tax reform — a.k.a. raising taxes and closing tax loopholes to help pay down the deficit. Nearly all Republican lawmakers have signed a pledge not to raise taxes.

Charles Gabriel: The biggest fights are clearly over Republicans’ resistance to adding any new revenue as part of the solution. And on the other hand, the Democrats are very resistant to tackling entitlements.

S&P said the cuts Congress has made are not sufficient. It also blamed an unwillingness to raise revenues and invest in kickstarting the economy and creating jobs — jobs which would generate tax revenue. Again, analyst Keith Davis.

Davis: S&P outlined a few things that they needed to see to be more comforted that we are on a more sustainable path going forward with regard to meeting our debt. And the political wrangling that took place I think signaled to them that we are not up to the task of coming to a compromise.

Particularly with elections just around the corner.