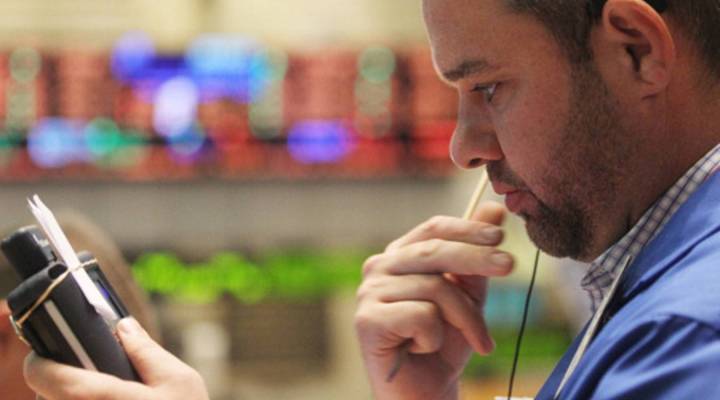 COPY
A trader works on the floor of the New York Stock Exchange after the opening bell on August 5, 2011 in New York City. Mario Tama/Getty Images

A trader works on the floor of the New York Stock Exchange after the opening bell on August 5, 2011 in New York City. Mario Tama/Getty Images
Listen Now

Kai Ryssdal: The market action today was, in a word: wild. Down, then down some more, then up then mixed by the bell.

Volatility like that makes for great headlines and lots of excitement, but for most people, it’s just plain scary. Visions of retirements and college funds evaporating, things like that.

So this morning we sent Marketplace’s Stacey Vanek Smith out to talk to investors and investment managers about how they’re dealing with the market drama.

Stacey Vanek Smith: Investors are having all kinds of reactions. There’s nervously watching and waiting, like New Yorker Darry Go.

Darry Go: I didn’t know what to do because my stocks are really falling apart. It’s really hurting me at this point.

Then there’s the take-the-bear-by-the-horns approach, like Loretta Streng in New York.

Loretta Streng: I pulled it. I pulled it out of the stock market. I put it into, just into money markets. I’m not going to sit there and watch it just disintegrate.

And then there are the Zen masters, like Gibran Begum in Los Angeles.

Gibran Begum: I actually took a look at them, they were down 5 or 6 percent from yesterday. But you stay the course, a year or two from now, they’ll be up twice that much.

New York money manager Stephen Leeb says he keeps hearing one thing over and over again.

Leeb says we’re not. Still, he says it’s hard to give advice at the moment, because the swings in the market have been so dramatic.

Leeb: It sort of has to shake up your belief in long-term investing, it really does.

Leeb says this latest market swing is a big correction.

Ken Rogoff is an economist at Harvard. He says the markets moved too high too fast, thinking we’d bounce back from the recession.

Ken Rogoff: In a way, we’ve never exited this great contraction; we’re slowly coming out of it. But during this period of slow growth, you’re more fragile. Things can move faster up and down than in a more stable situation.

Nervous buying and selling by all kinds of investors is making market fluctuations worse. Rogoff says this volatility will rule for the foreseeable future.

Bill Stone is chief investment strategist with PNC Wealth Management. He says volatility on Wall Street can be a big drag on Main Street.

Bill Stone: The volatility may in fact cause people to delay decisions for fear — not make investments that they’d like to make, not hire the people that they were thinking about hiring.

In the meantime, investors are pretty much stuck watching it all play out.