Kai Ryssdal: I’m going to run a name by you, give a little wave or something if it means anything to you.

No real reason for you to know of him, unless you’re a policy geek. Norquist, it’s fair to say, is an anti-tax crusader. An amazingly effective anti-tax crusader. He’s gotten 95 percent of Republicans in Congress to promise no tax increases. Period. Full stop.

But then yesterday, he said this to the editorial board at the Washington Post about the Bush-era tax cuts.

Grover Norquist: Not continuing a tax cut is not technically a tax increase.

So hmmm, right? That was seen — not unreasonably — as an opening to a possible solution to the debt ceiling talks. And it was just the start of today’s political drama. Marketplace’s Scott Tong reports.

Scott Tong: Raise your right hand: ‘I — fill in the blank — oppose any and all efforts to increase the marginal income tax rates — yada yada.’

Question is, if Republican negotiators let tax cuts expire and tax rates go back to a higher level, do they break the pledge? Norquist said technically no, and dealmakers saw an opening, a softening from an ideologue. Until Norquist said this on cable TV today:

Norquist: Americans for Tax Reform would oppose any effort to weaken, reduce or not continue the 2001, 2003 Bush tax cuts.

Kenneth Kies: Well, Grover just learned he should never meet with the Washington Post editorial board.

Republican lobbyist Kenneth Kies is a veteran of Washington tax battles. He thinks Norquist said something he didn’t mean.

Certainly not a signal to Republicans to compromise. There’s consensus Norquist is not that kind of guy.

Who is he? Tom Mann at the Brookings Institution says he descends from a lineage of economic ideologues.

Tom Mann: He took an idea, sort of supply side economics, Reagan tax cutting, and came up with the idea of a pledge. He is associated with one thing and that’s the tax pledge.

Mann says the power of that pledge is unchanged, whatever Norquist said or meant. Here’s tax policy analyst Clint Stretch at Deloitte.

Clint Stretch: I think what we saw today was that the pledge has taken on a life that may be greater than Mr. Norquist himself.

The upshot, he says: Republicans — the ones who actually vote — remain firm on the tax issue. 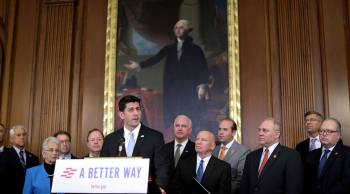