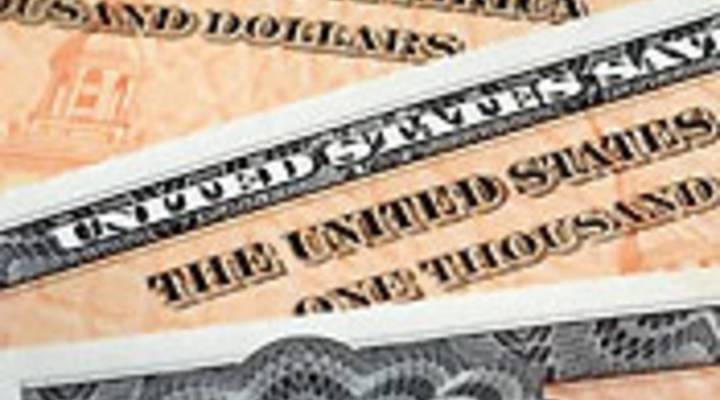 Kai Ryssdal: Eleventh hour. Right up against it. Runnin’ out of daylight.

Pick your verbal imagery, but there does seem to be a growing sense in Washington that all the foolin’ around’s got to stop and real progress has to start bein’ made. The president laid it out for reporters today in the White House briefing room.

Barack Obama: So, here’s where we stand.

Obama: We have a Democratic president.

Obama: We now have a bi-partisan group of senators.

That’d be the Gang of Six — they came out today with a new, new plan to make things better.

Obama: And we’ve got the American people.

Wait — that’s it? No House Republicans? And more to our purposes, no markets? Stocks have been up and down quite a bit, but forget equities and think about bonds — government bonds. Eerily quiet over there, which is pretty darn strange. Seems like if ever there was a time for bond investors to be a leading indicator, it would be right about now.

Stacey Vanek Smith: Treasury notes, T-bills, T-bonds — whatever you want to call them, they’ve had the reputation around the world as a sure thing. Ken Goldstein is an economist with the conference board.

Ken Goldstein: For decades, the U.S. bond has been looked at as a haven of security. Folks have been willing to buy U.S. bonds even though the yield is low.

Meaning investors were willing to accept low interest rates, because U.S. bonds were seen as safe. But if the U.S. were to default, and suddenly not pay interest on those I.O.U.s?

Goldstein: It would destroy the bond market, you would see bond yields go sky-high.

You might all of the debt ceiling drama would have had scared investors away, but it hasn’t. The reason? Well, to borrow a line from An Officer and a Gentleman:

An Officer and a Gentleman: I got nowhere else to go!

At least in the short term. Ablin points out investors have been demanding higher interest rates for long term debt, like 30-year Treasury bonds.

Alan Levenson: If you think the U.S. is headed to financial ruin, that may not happen in two years, but you’re not so sure you’ll get paid back lending your money for 30 years.

Even with those concerns about the future of the U.S. economy, interest rates are pretty low — roughly 4 percent for 30-year Treasury bonds.