Kai Ryssdal: Here’s a mixed bit of news: Shoplifting is on the rise and that could mean the economy is slowly recovering. The National Retail Federation finds that a lot of the recent spike is from employee theft. And the fact that they’re stealing means they’re not as scared about losing their jobs. Or it may mean that people are unemployed, angry and want to take it out on someone.

Rachel Shteir has written a book about the historical and cultural attitudes toward shoplifting. It’s called The Steal. Rachel, welcome to the program.

Rachel Shteir: Thank you so much for having me.

Ryssdal: Is it too simple to say — at the amateur level — that people are doing it for the thrill of getting something for nothing?

Shteir: No, that’s not too simple at all. I think that’s enormously complex. I think people want things that they can’t have and it’s incredibly exciting to steal.

Ryssdal: The thrill of potentially being caught, right?

Ryssdal: And when you’re talking about amateurs, it’s not just John Q. Public. You can’t do this interview without talking about Winona Ryder and Lindsay Lohan. I mean, explain that.

Shteir: Yeah. Well, I think a common misconception is that amateur shoplifting arises out of lack of money. The truth is that most amateur shoplifting arises out of want — either as, you say, the thrill or the desire to get something out of nothing or as kind of impulse control disorder or as a disease. There are lots of different ways to talk about why amateurs are stealing, but one thing that the most recent research does show pretty much across the board is that it’s not driven by need, as in Jean Valjean, I’d like to steal a loaf of bread.

Ryssdal: Are we talking here nickel-and-dime stuff? I mean, it’s not millions of dollars. Right?

Shteir: Well, the most recent figures are $12 billion a year.

Ryssdal: Well yes, in the aggregate it’s a whole lot of money. But I mean a pair of earrings, a book, a scarf or something?

Ryssdal: The pros do it to sell, right?

Shteir: Right. The pros do it to resell on eBay. And by volume that is the biggest problem that the retail industry has right now in dollar amount. Amateurs steal probably the most volume, but the dollar amount adds to less.

Ryssdal: Not to personalize this, but how much does it cost the average consumer? How much does aggregated shoplifting cost me when I go into a store to buy, I don’t know, a DVD player or something?

Shteir: The so-called crime tax. What is costs the American family is around $400.

Ryssdal: I mean, it really does. Do you know how many people admit to being shoplifters or having done it in the past?

Shteir: Yes, there was one large-scale study done at Columbia University in 2008. It’s the most recent, well the only large-scale study on shoplifting that I’ve ever seen done, actually. I think the statistic there is around 27 million people.

Ryssdal: So listen, on the theory that there is one chance in 10 that the answer to this question is going to be yes: Do you ever shoplift?

Shteir: Oh, when I was a kid I stole some bubblegum from Woolworths.

Ryssdal: Oh see, now me too. That’s what I was going to say.

Shteir: That’s what you were going to say?

Ryssdal: It was Pete’s Candy Store in the village. And I actually got caught too. But yeah…

Shteir: Oh my goodness. By Pete?

Ryssdal: Yeah, but… this is a terrible thing and my mom is going to yell at me. He was kind of an old guy. And so he just grabbed me. And it was me and my buddy. And he turned us around and made us put it back and that was it. And now mom, you know.

Shteir: Oh, so your mom never knew before this moment?

Ryssdal: Rachel Shteir, her book is called The Steal. It’s a cultural history of shoplifting. Rachel, thanks a lot.

Shteir: Thank you so much. 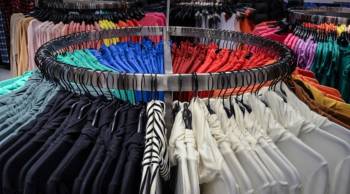 Retailers brace for return fraud in the holiday season