STEVE CHIOTAKIS: Not only does the NBA face a lockout next season but it may be on the verge of losing one of its largest fan bases: China. That’s because of the news that China’s most famous basketball player, seven-feet six-inch Yao Ming, could retire.

ROB SCHMITZ: These are the courts Yao Ming grew up playing on. They’re in a public park, surrounded by the skyscrapers of downtown Shanghai. Rumors of Yao’s retirement have 16 year-old player Lu Zhentao reminiscing.

He’s also the reason 30 million Chinese people watch the NBA each week. He’s helped make China the biggest market for the NBA outside the U.S. The NBA’s worth $2.3 billion here. In an online poll in China, 57 percent of those surveyed said they would no longer watch NBA games. Given the market here, that’s a big deal. But basketball player Lu doesn’t believe it.

LU: I think it’s hard for many Chinese to accept the fact that he’s leaving the sport. But they’ll come around. Older generations liked Michael Jordan, and my generation loves Yao. Real basketball fans will keep watching.

That’s what the NBA’s hoping — 300 million people play basketball in China. There is one more player in the NBA from China: Yi Jianlian plays for the Washington Wizards. But he doesn’t have the household name status of Yao. 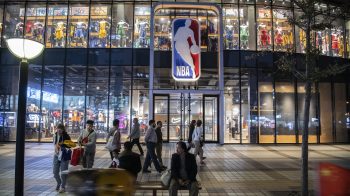