As debt talks resume, lawmakers tied up in tax debate

As debt talks resume, lawmakers tied up in tax debate

STEVE CHIOTAKIS: It’s back to negotiations for the White House and Republican leaders in a quest to find some common ground on raising the federal debt limit. And while the discussions are dominating Washington the issues they raise will ripple across the world. The Treasury Department says the U.S. will default if a deal isn’t done in the next few weeks.

Marketplace’s Mitchell Hartman is live with us with more on that. Good morning Mitchell.

CHIOTAKIS: Anything new in those talks?

HARTMAN: Well, last month when Republicans left the talks, it seemed any increase in tax revenue was totally off the table for them. Serious restructuring of Medicare, Medicaid, Social Security seemed to be a no-go for most Democrats. Now, Republican House Majority Leader Eric Cantor is saying cutting corporate tax breaks and loopholes — which is something the President’s been railing about — could be on the table, as long as there are other tax cuts. The White House, meanwhile, is opening the door to changes to Medicare and even Social Security to slow their cost-rise over time. All told, it could amount to a grand tax-raising-and-deficit-cutting deal.

CHIOTAKIS: How are these talks playing overseas, Mitchell?

HARTMAN: Well, investors are starting to pay attention, especially with the debt ceiling of August 2 deadline looming. Jan Randolph follows sovereign risk — that’s basically government debt — at IHS Global Insight in London. I asked him how all the politicking here in the U.S. over raising the debt ceiling looks in Europe, given all the recent turmoil they’ve had over Greek debt.

JAN RANDOLPH: One could expect debate and disagreement from 27 governments in the European Union. But we don’t really expect it from one government in the U.S.

And Randolph says investors will get more jittery if this goes down to the wire and there’s still no deal to raise the debt ceiling by later this month.

JEREMY HOBSON: President Obama will sit down with Congressional Republicans at the White House today to talk debt. This’ll be the first official sit-down since last month when Republicans walked out if negotiations to raise the federal debt limit in exchange for long term deficit cuts. The Treasury Department has warned that if the debt ceiling isn’t raised by August 2, the U.S. will default.

Marketplace’s Mitchell Hartman joins us now live with the latest. Mitchell any progress since the last meeting?

MITCHELL HARTMAN: Well, you know last month when Republicans left the talks, it seemed any increase in tax revenue was off the table for them, and serious cuts to Medicare, Medicaid, Social Security were a no-go for Democrats. Now, Republican House Majority Leader Eric Cantor says he could consider scaling back some tax breaks and loopholes — this is the kind of thing the President has been railing about. Though he’s quick to add that they’d have to be offset by other tax cuts. The White House, meanwhile, seems to be indicating it’s ready to talk about maybe making wealthier seniors pay more for their Medicare coverage, possibly slowing how much some government benefits rise with inflation. All told, it could amount to a grand tax increase and spending cut deal.

HARTMAN: Well, you know a major tax overhaul and putting together $2, maybe as much as $4 trillion in spending cuts is going to take a while to play out, says economist Jan Randolph. He’s at IHS Global Insight in London.

JAN RANDOLPH: But there’s really no time left to do this. So there needs to be a short term fix to raise the debt ceiling with a commitment both on taxes — raising them — and cutting expenditure. Both need to happen.

And even if the sides seem to make progress, it still could go down to the wire as the politicians play for votes. The closer it gets to August 2, the more investors are going to be watching. 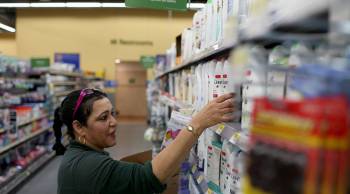