STEVE CHIOTAKIS: Fewer pieces of currency are rolling off Treasury presses these days. Not so many dollar bills and five spots being made, according to a story in today’s New York Times. Forty years ago, the value of U.S. currency in circulation around the country equaled about 5 percent of American economic activity. Last year, that number was half that — 2.5 percent.

Binyamin Applebaum wrote the story today in the Times and joins us now. Good morning.

CHIOTAKIS: So what kind of money are we talking about? How much less money is being printed?

APPLEBAUM: We talk about 6 billion notes are printed each year now. That’s down from 9 or 10 billion a decade ago. Most of that is small denomination stuff — $1s and $5s and $10s and that’s where the decline has been greatest. Higher denomination stuff — $100 bills in particular — more and more demand for those from around the world.

CHIOTAKIS: No kidding. What does that say? Does that say people are richer, they need those $100?

CHIOTAKIS: You wrote in the article that there are no $10 bills that were printed last year. Why no $10 bill?

APPLEBAUM: There’s a combination of things going on. One is that we’re using less money. More and more of our transactions — we swipe a card, we transfer money online. And so we just don’t need as much currency. It’s also the case that they Fed is getting better at keeping bills in circulation. So there’s less demand for new ones.

CHIOTAKIS: It would seem to me — credit card companies probably love this news right?

APPLEBAUM: Credit card companies have been making a lot fo money from this trend for a long time. The credit card industry has really pushed to make this technology widely available. This has become a big profit center for banks. We’ve lately seen a lot of controversy in Washington about how profitable it should be. And that’s likely to continue precisely because this is becoming more and more important.

CHIOTAKIS: Do you get the feeling, Binyamin that paper currency is just going away? And will go away completely at some point?

APPLEBAUM: I really don’t. At least not in our lifetime. It’s clearly being confined to a smaller role, but there are things that we still do with paper currency that are awfully hard to replace — paying babysitters, leaving money in a donation plate, gambling. All sorts of activities that are not going to be real easy to transfer to credit cards. 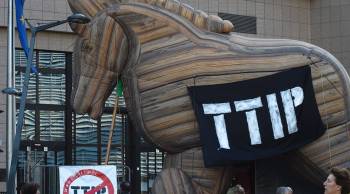 Global trade growth is lackluster, so why all the controversy?