STEVE CHIOTAKIS: United and American Airlines launch a key lawsuit in Europe today. Those carriers are unhappy with a European plan to curb the airline industry’s carbon emissions.

The legal challenge is especially critical because Europe’s carbon plan is the first that covers airlines.

STEPHEN BEARD: The plan comes into force next year. Every airline using an EU airport will be affected. They’ll be given a limit on the amount of carbon they are allowed to emit. Exceed those limits and the carriers will have to buy so-called carbon permits.

We’re not talking here about limits on carbon emitted in European airspace only. It’s the whole flight that will be taken into account.

The EU says the carbon emission plan will encourage carriers to buy more fuel efficient planes. But the carriers are fretting about the cost of the plan, an estimated $1.6 billion a year. 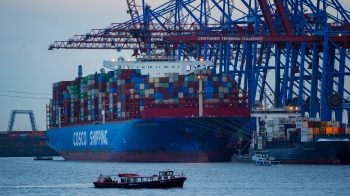 What’s a “carbon border adjustment mechanism,” and what does it mean for U.S. exports?