Carsharing matches unused cars with people who need them

Carsharing matches unused cars with people who need them

Bob Moon: You might find this hard to believe, but consider it my own declaration of independence: I live here in Southern California and I don’t — do NOT — own a car. I do rent one occasionally.

Too bad I don’t have access to a budding business up north, in the San Francisco Bay area. Three companies there are matching cars that sit unused with people who can use them. It’s called “carsharing.” So people like me, who occasionally need a car, can take the neighbor’s Ferrari out for a spin.

That got KALW’s Casey Miner wondering: why would people share their cars?

Ali Fenn: My car is a fun car, it’s a big, jacked-up Jeep, and it’s got oversized tires, the top comes off and it’s a fun car.

Casey Miner: Ali Fenn lives in San Francisco. And she’d be happy to let you borrow her Jeep, even though she’s probably never met you.

Fenn: I had my first rental within a week. It was slightly awkward. The person came up and said, “How does this work? What do I do?” I said, “I guess I just give you my keys and you drive away.” It was very easy.

Fenn drives her Jeep maybe once a month; the rest of the time, it just sits in her garage. A few months ago, she found out about a new company called Getaround, located just down the street from her. She registered her Jeep on Getaround’s website, set up a calendar to show when it was available and named her price.

Renters pay for gas, and the company provides comprehensive insurance, so the car is totally covered.

Fenn: It was gone for 24 hours, it was gone overnight, and I walked down through my garage to go somewhere else and the car wasn’t there. And I thought, “I have no idea where my car is at this moment.”

Jessica Scorpio is one of the founders of Getaround. She says people who car-share don’t think of their cars as their babies; they just see them as tools. So they’re not overly attached.

Jessica Scorpio It takes a certain type of open-minded person to decide they want to share their car.

We’re not talking cheap clunkers here. You can rent anything from late ’90s sedans to a brand-new Tesla Roadster. The idea is for car owners to make money. That Tesla will run you $50 an hour.

Shelby Clark: We’ve got a number of Priuses, we’ve got a bunch of SUVs, a truck, a big cargo van.

Shelby Clark is the founder of RelayRides, another car-share company in the city. His goal is for people to be able to find the kind of car they need, when they need it.

Clark: People are becoming more and more comfortable with sharing. But at the same time, people don’t really want to compromise on their lifestyle. And I think that sharing goods is a really great way to do that.

Right now, a few thousand people are carsharing in the Bay Area. But will this work for those of us who don’t have fancy rides? I decided to find out by signing up my own car: A 1998 Honda Civic. Dark green and awesome. I picked Getaround, because they have cars and renters in my neighborhood.

Jessica Scorpio met me at Getaround’s offices in San Francisco to take a look.

Scorpio: I’d say this is probably on the old, beat-up end of the spectrum, to put it kind of bluntly, I guess.

OK, so my car does have more than 100,000 miles on it. And one of the doors doesn’t open. And there’s no radio. But it runs just fine. Surely I could persuade someone to rent it. I sat down with Scorpio to create my car’s online profile.

Scorpio: Check off what features your car has.

Miner: I do have air conditioning. Let’s see. Nope, I think that might be the only feature that my car has.

Given that, I set my hourly rate to the minimum: Just $3 an hour. But a few days went by and no one was biting. I started to worry that my car just wasn’t good enough. Then, finally, I got a request.

Brooks told me he came to California more or less on a whim. The mood just struck him one day.

Brooks: And here I am.

Miner: Well, have a good time this week.

Brooks: Yeah, thanks for letting me use your car.

Brooks returned my trusty Honda Civic a few days later, in pristine condition: He filled up the gas, even made me a new set of keys. It was nice to have my car back, but in the end, I’m just as well off without it. If I really need to drive somewhere, I can always rent someone else’s car. 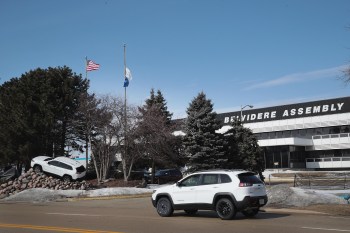