It’s unemployment.
Without dramatic action, the U.S. confronts an uncertain future–one that suggests “Americans on average would experience slower gains in living standards than did their parents and grandparents,” according to consultancy McKinsey & Co.

The catastrophic danger is not the federal debt/deficit issue that dominates the current debate in Washington and in hyperventilated news reports on cable TV. It is jobs.

The article for Bloomberg BusinessWeek has some thoughts of mine on how the once-great American job machine badly needs repair. Hopefully, a greater sense of urgency kicks in, but so far that isn’t the case.

Sad to say, it appears that America’s monetary mandarins are set on avoiding bold action, content to cross their fingers and hope that the current slowdown is nothing more than a soft patch. That so many policymakers are complicit in the sorry state of the nation’s job market is risking a long-term, Japanese-like stagnation of dashed dreams and pinched opportunities. It doesn’t have to happen. It shouldn’t happen. But it could. 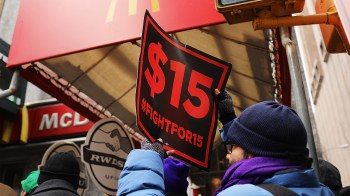