Jeremy Hobson: Drugmaker Pfizer heads to federal court today to defend its $1 billion-a-year money maker Viagra — that little blue pill is scheduled to go off-patent next year which means generic drugmakers can produce similar pills and sell them at a discount. But if Pfizer gets its way in this court case, the patent would be extended until 2019.

From our Health Desk at WHYY in Philadelphia, Gregory Warner reports.

Gregory Warner: One now-legendary day in the early 1990s, Pfizer scientists discovered that their new drug for blood pressure was causing men to have spontaneous erections. Pfizer immediately applied for a new patent, renamed the drug Viagra and the rest is history. The question in court today is whether that second patent is valid, and it hinges on a legal concept called ‘non-obviousness.’

Scott Hemphill is a law professor at Columbia University.

Scott Hemphill: So the fight in non-obviousness often comes down to whether some new invention could have been seen by anybody.

Anybody, in this case, with experience in drug manufacturing.

Hemphill: Pfizer’s reaction, as you would expect, is well, if this was so easy to figure out why didn’t anybody do it until we did?

John Iwanicki is a patent lawyer at Banner & Witcoff.

For instance, the new chewable Viagra that Pfizer is selling in Mexico. If Pfizer wins this court fight, it will have another seven years of billion-dollar sales. If generic manufacturer Teva wins, Viagra pills get cheaper for the consumer.

But while the art of evergreening can keep pills priced high, it also fosters continued innovation, says Bob Goldberg at the Center for Medicine in the Public Interest. Not long ago, Pfizer extended its patent for Viagra to treat a potentially fatal heart disease called infantile pulmonary hypertension.

Bob Goldberg: They found that Viagra, because it pumps blood supply to the body in low doses, was very effective in treating that. I think they got an additional six months of patent life.

The patent court found that a drug for erectile dysfunction used to save newborns? Not obvious. 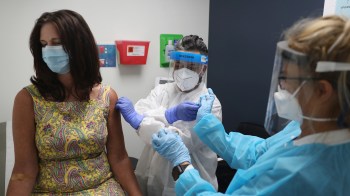