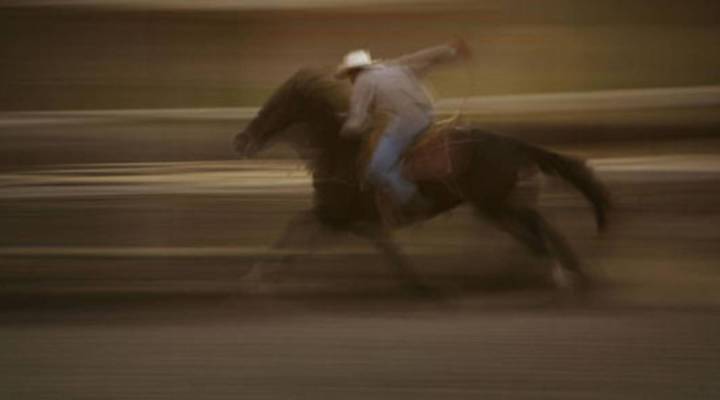 COPY
A man trains his horse along the San Gabriel River on July 10, 2004 near the Los Angeles, Calif. David McNew/Getty Images

A man trains his horse along the San Gabriel River on July 10, 2004 near the Los Angeles, Calif. David McNew/Getty Images
Listen Now

Jeremy Hobson: Well more horse shows around the country were cancelled over the weekend because of a deadly horse virus. In fact the national cutting horse association has cancelled all of its events for the time being.

Stacey Vanek Smith: Sharon Tullis from Hermiston, Ore., has been cutting for more than a decade.

Sharon Tullis: Cutting is where you go into a herd of cattle, and the object is is to pull a cow out. And you are judged on how well your horse works the cow.

It’s big business — about $40 million in prize money is handed out every year. But since April, a highly contagious virus has killed 12 horses and caused a nationwide shutdown of cutting events.

Brad Smith is the president of the Washington Cutting Horse Association.

Brad Smith: There are number of shows in different disciplines being canceled, so it’s had a substantial impact.

No rodeos have been called off, but they’re taking precautions, says cutter Sharon Tullis.

Tullis: Canceling one of these rodeos would be like canceling an NFL football game. It’s just not as easy as it is to cancel a horse show or a cutting.

Cutting events are scheduled to resume in mid-June if the virus is contained.