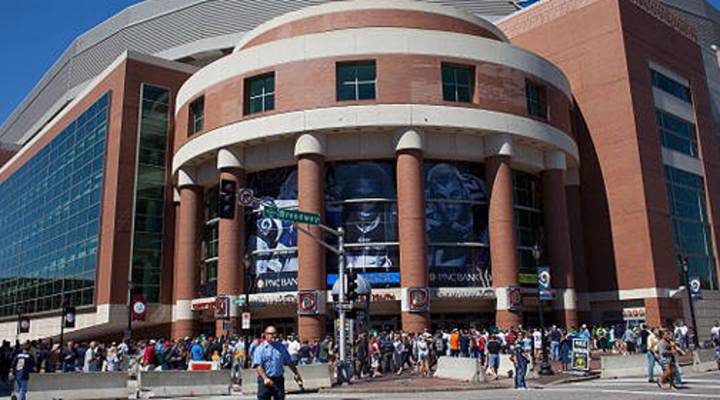 COPY
A general view of the Edward Jones Dome prior to the NFL season opener between the Arizona Cardinals and the St. Louis Rams. Dilip Vishwanat/Getty Images

A general view of the Edward Jones Dome prior to the NFL season opener between the Arizona Cardinals and the St. Louis Rams. Dilip Vishwanat/Getty Images
Listen Now

JEREMY HOBSON: Today, NFL owners and players will head to federal court to argue for and against football’s player lockout. The fight is causing anxiety for fans across the country. But not so much in St Louis where Rams fans are more worried about losing their team.

Turns out a clause in the Rams’ stadium lease allows the team to skip town, unless the city foots the bill for major upgrades.

Adam Allington has the story from St. Louis Public Radio.

ADAM ALLINGTON: The Edward Jones Dome was built in 1995, a year after the Rams moved to St. Louis. Back then it was a next-generation sports venue — a downtown stadium with adjacent convention center for year-round use.

Last year, Sports Illustrated ranked the Dome as the worst stadium in the NFL. Fans like Andrew Wilson complain about downtown congestion, and lack of parking for tailgating.

ANDREW WILSON: Seeing a game at the Dome is ike going over to your grandparent’s house. You know — its, like, very bland. I have more fun watching it at home than I do going to the game.

Statements like that are the reason the Dome’s main tenant — the St. Louis Rams — is weighing its options. The Rams’ lease with the city requires the Dome rank among the top tier of NFL stadiums by 2015. And with the cost of new stadiums running close to $1 billion, many fans wonder if football is on its way out in St. Louis.

Bob O’Loughlin is chairman of the St. Louis Convention & Visitors Commission, which manages the Dome.

BOB O’LOUGHLIN: I think there is a lot you could do to the current stadium for a lot less than a $1 billion, but I can assure you that all of our conversations will be held in confidence until we have a deal struck.

But Rams owner, sports mogul Stan Kroenke, could demand millions of dollars in publicly-funded upgrades to the dome. Everything from high tech score boards to a retractable roof. All this at a time when Missouri State Senator Jim Lembke says the city and state can least afford it.

JIM LEMBKE: I really think that in our current climate, it’s going to be very difficult to get that across the finish line.

The city will start negotiating with the Rams early next year.

Patrick Rishe is a sports economist at Webster University. He says talks in St. Louis could depend on what happens in Los Angeles, where developers are pitching their own football stadium.

PATRICK RISHE: If that happens, then teams like the St. Louis Rams, like the Jacksonville Jaguars, like the San Diego Chargers — those teams could be fair game to relocate.