Don’t freak out about global recovery – yet

Don’t freak out about global recovery – yet

JEREMY HOBSON: Global stocks are down this morning after a plummet on Wall Street yesterday. It seems that bad jobs news, and poor manufacturing numbers are causing investors to wonder if we’ve hit a soft patch. Or worse, we’re in a double-dip recession.

David Kelley is chief market strategist with JPMorgan Funds and he’s with us live. Good morning.

HOBSON: Well why such a drop in confidence yesterday, David? I can’t imagine that it was just that one bad jobs report.

KELLEY: No, we’ve had a drip, drip, drip of bad economic news for the last three or four weeks and I think the jobs report and the ISM report yesterday — those big reports along with weak vehicle sales were really the final straw. And I think people decide to sell now and ask questions later.

HOBSON: A lot of economists are pointing to the impact of both the earthquake in Japan and also the European Debt Crisis — both obviously concerning in the near term — but are they really long term problems?

KELLEY: Well, I think the European debt crisis may be a longer term problem, but I don’t think that’s really affecting the numbers. The Japanese issue is a problem but it’s pretty hard to quantify. And I think that there’s more weakness in the economy than just the Japanese issue. I mean you can’t blame Japan for our weak housing market and we certainly are still seeing a weak housing market.

HOBSON: And what about the uncertainty over what happens next in Washington both when it comes to the debt ceiling and also what happens when the Fed stops buying bonds?

KELLEY: Well on the debt ceiling it certainly doesn’t help. I mean we really do need to see some adult behavior in Washington with regard to this issue. But there is a lot of uncertainty. There’s uncertainty about the debt ceiling, there’s uncertainty about the end of QE2, and you know right now we’ve got a deficit of good economic news and surplus of uncertainty. Hopefully later on in the year this’ll turn around. I think we will see stronger economic growth. But for right now, investors are justifiably nervous.

HOBSON: And when you talk about QE2 David you are not talking about the ship that crosses the Atlantic, but the quantitative easing bond buying program from the Fed. Well thanks so much David Kelley. 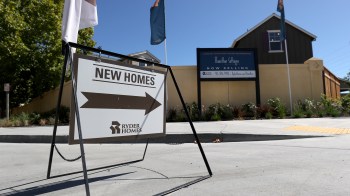