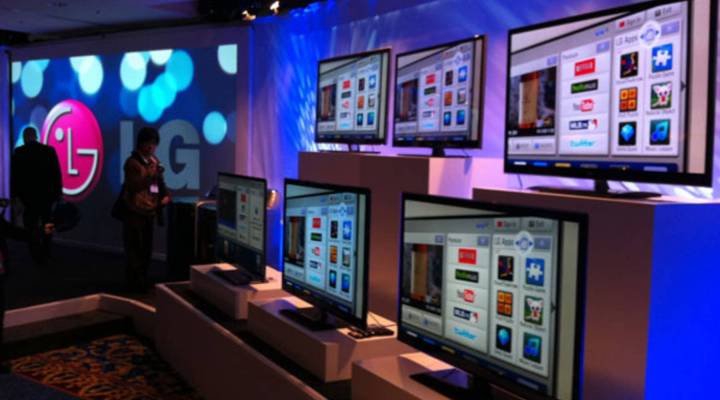 COPY
Last year the buzz was all about 3D TV. This year the idiot box is getting smart. LG an others are rolling out sleek sets that connect seamlessly to the net. Steve Henn/Marketplace

Last year the buzz was all about 3D TV. This year the idiot box is getting smart. LG an others are rolling out sleek sets that connect seamlessly to the net. Steve Henn/Marketplace
Listen Now

Kai Ryssdal: So whaddya think of Ashton Kutcher? I ask because you’re about to be seeing a whole lot more of him. CBS announced today Kutcher’s going to take over for Charlie Sheen in the hit comedy “Two and a Half Men.”

The deal comes just before what is arguably the biggest week on television’s calendar: the upfronts, when the networks reveal what’s going to be on in the fall and advertisers start buying ads. With ever more cable channels, Internet options and video games out there — not to mention the fact that a lot of us are sailing right by TV ads with a click of the TiVo button — it seems a little strange that advertisers are paying more than ever.

Marketplace’s Stacey Vanek Smith has a look at what gives.

Stacey Vanek Smith: Advertisers are expected to shell out a record $9.5 billion on network TV ads this year — not that they’ll be playing to record audiences. Tim Molloy is TV editor at thewrap.com.

Tim Molloy: Networks are getting extremely good at doing everything they possibly can to make sure advertisers get their dollar worth.

Like allowing more product placement in shows. Those DVR-proof sales pitches are not only getting screen time, they’re starting to get script time, too. Take this scene from “30 Rock.”

“30 Rock” clip: These Verizon Wireless phones are just so popular, I accidentally grabbed one belonging to an acquaintance. I mean, if I saw a phone like that on TV, I would be like, where’s my nearest retailer, so I can get one? Can we have our money now?

Networks are also exploring interactive ads, like coupons or games that are tied to a traditional ad spot. Michael Finn is president of Brightline, a company that creates those ads.

Michael Finn: Networks are really trying to figure out a way to charge more for commercials by having more engagement taking place on the screen.

And, all innovation aside, TV is still the best way to reach the biggest audience, says media analyst Tom Adams with IHS Screen Digest.

Tom Adams: Despite now 15-plus years of the Internet and proliferating channels and DVRs and everything else that’s going on, the main activity continues to be sitting down at 8 o’clock after dinner and seeing what’s on TV.

So, technologies may come and go, but our couch potatohood? You can take that to the bank.