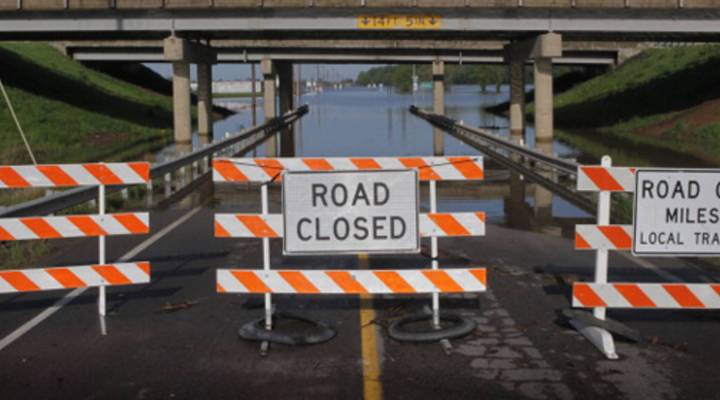 COPY
A road passing under Interstate 55 is closed due to flooding on May 3, 2011 at Cape Girardeau, Mo. The Army Corps of Engineers yesterday blew a massive hole in a levee at the confluence of these two rivers to lower the river levels upstream and to help save the town of Cairo, Ill. Scott Olson/Getty Images

A road passing under Interstate 55 is closed due to flooding on May 3, 2011 at Cape Girardeau, Mo. The Army Corps of Engineers yesterday blew a massive hole in a levee at the confluence of these two rivers to lower the river levels upstream and to help save the town of Cairo, Ill. Scott Olson/Getty Images
Listen Now

Tess Vigeland: Officials in Missouri made a Sophie’s Choice last night. The U.S. Army Corps of Engineers intentionally blew up a key agricultural levee to keep floodwaters from inundating the town of Cairo, Ill. But in the process, some farmers in Missouri lost everything — their crops, their homes and quite possibly the soil in which to replant once the crisis is over.

Adam Allington: Ed Marshall farms about 8,000 acres in Mississippi County in southeast Missouri. At this time of year, he normally looks out on miles of corn and wheat. But right now…

Ed Marshall: It’s water as far as I can see. You know, and our ground is flat as a table, so I can see for seven to eight miles and there is nothing but water.

The decision by the Army Corps to blow up the levee has helped waters recede slightly from Cairo, a town of about 2,000 people. But it comes at the expense of about $300 million worth of corn and wheat that was already in the ground in Missouri.

Still, the flooding is not expected to have much of an effect on the U.S grain market. Scott Gerlt is a crop analyst with the University of Missouri.

Even with crop insurance, Gerlt says farmers typically do not recover the entire value of lost crops. But Illinois Senator Dick Durbin says the federal government will not ignore stricken farmers in Missouri.

Dick Durbin: We don’t let people down. We kind of stand together as a family. We want to save this town and the people who live here, and if the folks on the other side of the river are hurt in any way because of this flooding, we’re going to stand by them. And we should.

But even with federal assistance, farmer Ed Marshall worries the flooding could strip away much of his valuable topsoil.

Marshall: It’s sad, it really is; you know you spend your whole life building this ground up and trying to leave it in better shape than the way it was given to you.

The Corps of Engineers set off a second planned explosion at about noon today. This time however, the 5,000-foot breach was put there to help floodwater flow back into the Mississippi River.