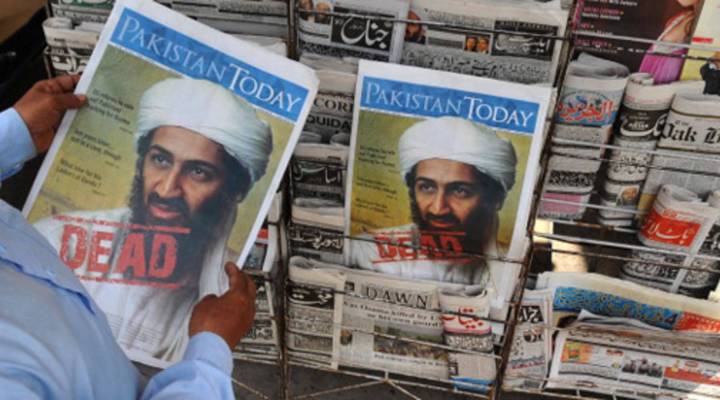 COPY
A Pakistani man reads a newspaper with the front page displaying news of the death of Osama bin Laden at a stall in Lahore on May 3, 2011. The U.S. closed two of its consulates in Pakistan to the public until further notice, a day after Osama bin Laden was killed near the capital Islamabad. U.S. officials are puzzled by the comfortable surroundings of the Abbottabad compound where bin Laden lived, and the fact that his presence in a fortified, upscale building did not attract Pakistani authorities' suspicions. Arif Ali/AFP/Getty Images
Bin Laden Dead

A Pakistani man reads a newspaper with the front page displaying news of the death of Osama bin Laden at a stall in Lahore on May 3, 2011. The U.S. closed two of its consulates in Pakistan to the public until further notice, a day after Osama bin Laden was killed near the capital Islamabad. U.S. officials are puzzled by the comfortable surroundings of the Abbottabad compound where bin Laden lived, and the fact that his presence in a fortified, upscale building did not attract Pakistani authorities' suspicions. Arif Ali/AFP/Getty Images
Listen Now

Tess Vigeland: Today, the White House clarified some details of Sunday’s raid on the bin Laden compound in Pakistan. It said the terrorist mastermind was not armed but did resist before he was shot and killed. It also said that the U.S. Navy SEAL team that conducted the raid seized computer hard drives that could help in tracking terror cells and the money used to operate them.

On yesterday’s broadcast, we examined what bin Laden’s death means for future financing of terrorism. We’re going to look now at how counterterrorism officials follow that money trail. Matthew Levitt is at The Washington Institute for Near East Policy. Thanks for joining us.

Matthew Levitt: Pleasure to be here, thanks for having me.

Vigeland: In the years following 9/11, most of the focus on terror financing was on money-laundering operations, charities freezing assets of suspected donors. How has that financing changed, if it has?

Levitt: Well, it’s developed. People tend to lose fact that there are two sides to the countering terror financing coin. One of them focuses on stemming the flow of funds. The other half of it — and sometimes the much more powerful half of it — is not stemming the flow of funds, but allowing those flows to continue once we’ve identified them so we can follow them for financial intelligence purposes.

Vigeland: How centralized is terror funding at this point? You know, we heard on the program yesterday that yes, bin Laden had a fundraising machine of sorts, but there are so many splinter groups now that it’s not that centralized.

Levitt: I think that Al-Qaida’s financing has become much more decentralized; some of the franchises, Al-Qaida in the Arabian peninsula, in the Islamic Maghreb, finance on their own; in North Africa, largely through kidnapping.

Vigeland: How much of this financing goes through the world banking system at this point? Or does it move around in other ways?

Levitt: Terrorists writ large, not just Al-Qaida, have diversified — they don’t put their eggs in any one basket anymore, ever since it was exposed that the U.S. government had the ability to look into international transfers to identify terror financing. You have to assume that our adversaries have also branched out into hawalas or other types of remittances; cash couriers. But I think they can never fully leave the former financial system because it’s too reliable, too fast, and they can hide in plain sight — as bin Laden did for several years in this McMansion.

Vigeland: Is it possible that bin Laden could be as effective or more effective in death as in life, raising money for Al-Qaida?

Levitt: I think he could be. You could go around with a bin Laden clip right now to people who are angry about his death, probably rile them up and get them to donate some money. But it’s also the case that because of this action, those people who are affiliated with Al-Qaida or sympathetic to it have to be wondering: have we penetrated their emails, their phones? Now it’s clear that we’ve penetrated some courier networks. If I were a fundraiser, I’d be concerned that someone offering to donate money might be a source for authorities, and vice-versa. If somebody came to me with a pitch — can you donate? — I might concerned that they, too, were some type of undercover.

Vigeland: I was reading today that 9/11 cost an estimated $500,000, while the 2005 London attacks only cost about $2,000. How do we go after terror financing if these types of events can be carried out for so little money?

Levitt: It’s true that any given attack only costs a little bit of money nowadays. But it’s not true that terrorism is cheap. If you’re a homegrown, violent extremist, you can carry out that particular attack relatively inexpensively. But if you are trying to establish an organization, you’re going to have larger costs. For example, we found that Al-Qaida in Iraq was bearing significant expenses taking care of the families of its operatives, seeing to their day jobs, etc. And even if it only costs a little bit of money, if we can follow that money, if we can tag it, watch it and follow it, that can identify people who are everywhere from the donors at the bottom to the operatives at the top.

Vigeland: Matthew Levitt is director of the Stein Program on Counterterrorism and Intelligence at the Washington Institute for Near East Policy. Thanks so much for being with us today.