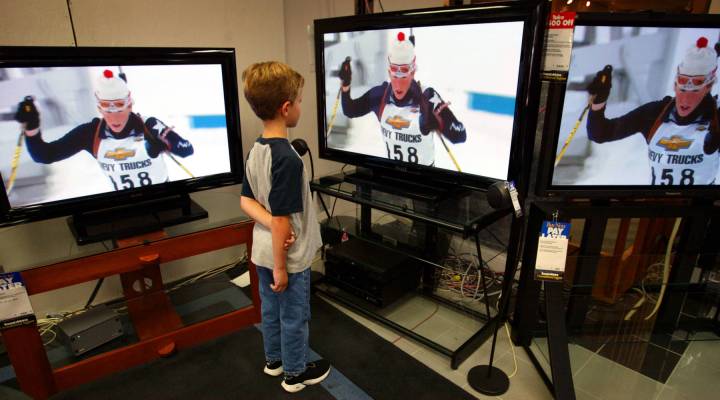 COPY
Joseph Cogel, 7, stares at a High Definition Plasma Television set in Miami, Florida. By February 2009, all but the smallest new televisions must be able to receive digital broadcast signals. Joe Raedle/Getty Images

Tess Vigeland: We are still a nation of couch potatoes. That bulletin comes to us today from the Nielsen ratings service, which found nearly 97 percent of U.S. households own a TV. Sounds like a lot. And it is.

But the report also found that TV ownership is actually down about 2 points. And that hasn’t happened for the last 20 years. Marketplace’s Stacey Vanek Smith has the story from New York.

Stacey Vanek Smith: Television is the great American pastime. Almost every single U.S. household has one. But the numbers are slipping and part of it is the economy.

Pat McDonough: We are coming out of a recession and a recession actually causes people to give up their television sets.

Nielsen’s Pat McDonough says television ownership dropped in the early ’90s during that downturn, but when the economy recovered, Americans went out and snapped up TV sets. But this time could be different, says McDonough, because a lot of people who don’t have TVs now are young, wealthy and well-educated.

McDonough: We believe they maybe using their Internet connection as a substitute for a television subscription.

Andrew Barrow: I realized I was paying $70 a month for nothing. I really never use cable.

Barrow now only watches TV on his computer, and his friends are also switching off their TVs.

Barrow: It’s more of a luxury item at this point — and almost like an unnecessary luxury.

About 140 million people watch TV on their computers, and they tend to be the younger viewers advertisers want to target, says Brad Adgate with Horizon Media.

Brad Adgate: It’s not really that muych different from young people cutting off their landlines and just being cell phone-only homes. The ad dollars follow the eyeballs.

TV still gets most of those eyeballs — and ad dollars — but Adgate says that’s clearly going to change. He predicts a lot of the people who killed their TVs during the recession, won’t go back.

Eliminating the concept of waste from the economy