JEREMY HOBSON: Now let’s get to this morning’s news on the S&P downgrade of the U.S. debt outlook. There’s a story in this morning’s Washington Post that says the Obama administration spent weeks privately urging S&P not to issue a negative outlook. That obviously did not work.

Richard DeKaser is an economist with the Parthenon Group in Boston and he’s with us live as he is each Wednesday. Good morning.

HOBSON: Well, tell us what you make of this news?

DEKASER: Well you know Jeremy, this is about the 80th time that the debt ceiling has been renegotiated and it’s usually a very perfunctory affair, but when budget debate is intense like it is now, things tend to flair up. Now the administration’s role is to calm nerves. They don’t want to see foreign investors get spooked, they don’t want to see higher interest rates. So I view all of this as part and parcel of pulling out all the stops to defend the integrity of U.S. debt and U.S. dollar. So we’ve been seeing, in particular the Treasury Secretary making speeches, providing interviews, trying to calm nerves. And I think this jawboning of S&P was simply one aspect of that full court press. And it’s hard to say in the end whether he’s been successful or not but the results have certainly been very favorable. Bond yields have not changed since S&P’s outlook was announced on Monday. And that’s certainly for the good.

HOBSON: Richard DeKaser, economist with the Parthenon Group, thanks so much. 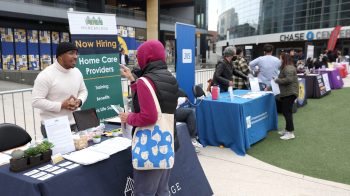 US job openings increased in September