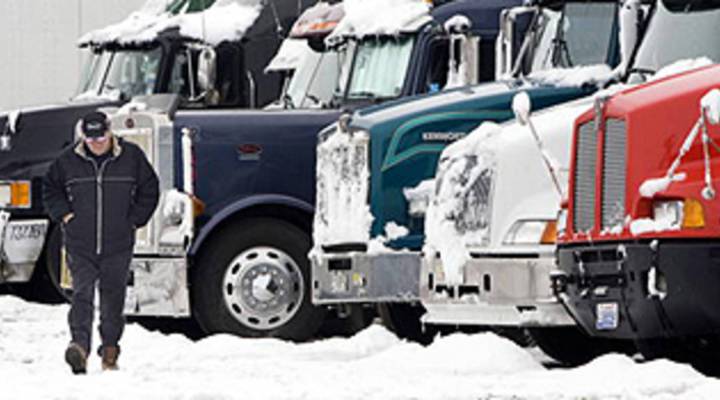 COPY
A man walks in front of a row of semi-trucks at the Broadway Fuel Stop in Hardin, Mont. Stephen Brashear/Getty Images

A man walks in front of a row of semi-trucks at the Broadway Fuel Stop in Hardin, Mont. Stephen Brashear/Getty Images
Listen Now

JEREMY HOBSON: This evening a half million pound truck so big it takes up the entire highway is scheduled to make its way from Idaho to Alberta, Canada.

It’s one of many scheduled to make the journey and those big loads have sparked a big controversy.

STACEY VANEK SMITH: Imperial Oil wants to use a small, winding highway through the Rocky Mountains to move giant pieces of mining equipment to an oil sand operation in Canada. Local businesses and environmental activists say it will devastate Highway 12 — known for pristine wilderness and steep switchbacks.

Gary Macfarlane, with Friends of the Clearwater, says the huge trucks tear up the roads and cause other damage. A test shipment last week hit a power line and cut power to 1,300 homes.

MACFARLANE: Local businesses fear it will change the nature of this wild and scenic river corridor to a high and wide industrial corridor.

Pius Rolheiser is a spokesman for Imperial Oil. He says the trucks will move at night, to avoid disrupting business. And Imperial will pay to improve roads and hire highway patrol.

PIUS ROLHEISER: Infrastructure investments and the local spending necessary to support these shipments, we estimate would result in about $100 million in economic activity for Idaho and Montana.

The shipments would take roughly a year to complete, with more than 200 separate trips.