Here are some of today’s top headlines from the Marketplace Morning Report and around the web.

Meanwhile, the number of planned layoffs at American companies was down big time in March. The Labor Department’s March employment report comes out Friday. You can ready Marketplace’s coverage here.

The Federal Reserve says it will not make its April 21st deadline to issue new rules on the fees banks can charge merchants when a debit card is used.

Funding for the new U.S. financial consumer watchdog bureau should be independent of the congressional appropriations process, Elizabeth Warren, the Obama administration adviser setting up the bureau, said at a U.S. Chamber of Commerce event Wednesday.

Nuclear power is just one topic on the agenda for President Obama as he speaks later today about our nation’s energy policy.You can read Marketplace’s coveragehere.

Japanese auto part shortages are now hitting Honda and Toyota plants in North America. Toyota’s gone so far as to ask dealers to stop ordering hundreds of parts for fear of running out.

Meanwhile, because of some serious money issues Fukushima’s operator, Tokyo Electric, says it probably won’t be able to continue working on a $10 billion reactor project in south Texas.

The Mortgage Bankers Association said this morning that with interest rates creeping up to 5 percent for a 30 year mortgage. The number of mortgage applications fell 7 percent last week.

Canadian drug company Valeant wants to buy rival Cephelon for about 6 billion dollars. Cephelon is said to have a lot of promising drugs in its pipeline.

Short-term car rental firm Zipcar said it expects to sell about 8.3 million shares at $14 to $16 apiece in its initial public offering.

The British bank Barclays is considering moving its global headquarters from London to New York due to the threat of higher capital requirements in the UK, the Wall Street Journal reported Wednesday.

Fitness guru Richard Simmons is sweatin’ on the jetway! Simmons is the new face of in-flight safety at Air New Zealand. On the video, Simmons goes through all the motions: Seat belts, cabin pressure, turn off those cell phones! I wonder if there’s a new fee for ear plugs. Check out the video at our website.

New research from a british dog food company finds man’s best friend is a common thief. The company says canines steal more than 50 million dollars worth of stuff from humans every year in the UK. Around 11 percent of pet owners said their dogs stole cash and jewelry…while 74 percent reported their underwear had been knicked. Experts say the dogs just do it so their owners will play with them.

You can read the rest of today’s Marketplace Morning Report stories here. 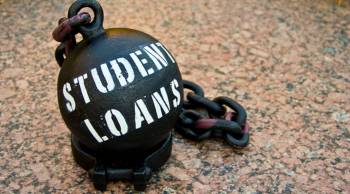 What worries you the most?