Ohio to vote on anti-union law

Ohio to vote on anti-union law

Jeremy Hobson: Well first it was Wisconsin. And now Ohio is looking to curb collective bargaining rights for unionized public workers. Ohio lawmakers are expected to vote on a bill today.

Bill Cohen: Union activists call the Ohio collective bargaining bill worse than Wisconsin’s because the Ohio plan impacts twice as many workers. Plus, it weakens bargaining power even for police and firefighters, and it says public employees no longer have to pay the equivalent of union dues.

Democrats and unions, though, see this as a Republican plan to wipe out their power base. Thousands of police, teachers and prison guards have been protesting.

Republicans have the votes to push the bill through, but critics have a plan B — a petition drive that would put the law onto the ballot, so voters could kill it. 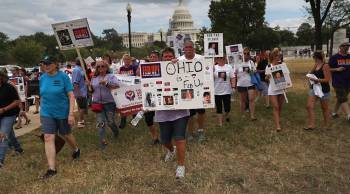