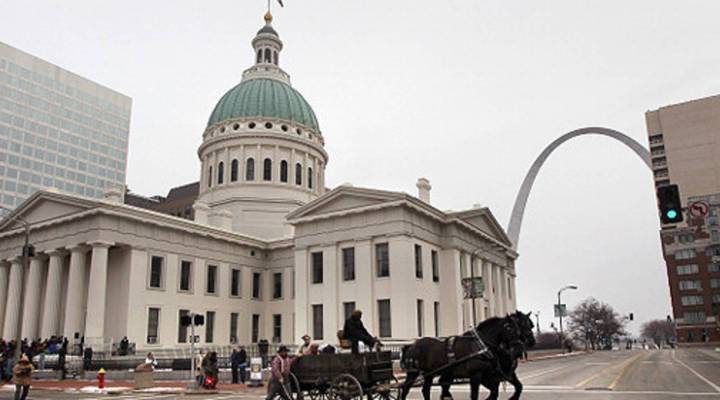 COPY
A cart carries off a group of people portraying slaves during the staging of a re-enactment of a mid-19th century slave auction January 15, 2011 in downtown St. Louis, Missouri. John Moore/Getty Images
Transportation Nation

A cart carries off a group of people portraying slaves during the staging of a re-enactment of a mid-19th century slave auction January 15, 2011 in downtown St. Louis, Missouri. John Moore/Getty Images
Listen Now

Jeremy Hobson: Here in Los Angeles, it’s now a challenge to find gas that’s cheaper than $4 a gallon. In other parts of the country when you want cheaper fuel you can simply cross state lines. Consider the border of Illinois and Missouri. Illinois has some of the most expensive gas in the country; Missouri is some of the cheapest.

And as St. Louis Public Radio’s Adam Allington reports, Missouri has a reputation for undercutting its neighbors.

Adam Allington: One of the cardinal rules about interstate travel through the Midwest: “gas up before you hit Illinois.” Illinois levies a hefty 42 cents per gallon tax on gasoline, among the highest gas taxes in the country.

Compare that with Missouri, which only charges 17 cents per gallon, and you’re bound to see a lot of Illinois license plates in St. Louis gas stations.

Cameron Hollway lives in Illinois and drives across the Mississippi River every day to work in St. Louis. During the last oil crisis in 2008, he actually ran out of gas trying to make it to Missouri.

Hollway: I always know that in Illinois, it’s 20 cents or so more than it is in Missouri, so I’m always going to fill up over here.

And it’s not just gasoline where Missouri undercuts its neighbor. The state also has lower taxes on beer, liquor, cigarettes, even sales tax.

Ron Leone: This is a fall on the sword issue, when it comes to state fuel taxes, state tobacco taxes.

But critics point out that cutting taxes on gas or cigarettes has never actually increased state revenues, or paid for new roads and bridges.

Ralph Martire is the director of an Illinois think tank called the Center for Tax and Budget Accountability.

Ralph Martire: All the data show that the supply-side theory of public finance, it just doesn’t work. So anyone who’s counting on that coming through, people buying substantially more gasoline because the taxes are lower are — I think the technical fiscal term is “goofy.”

Martire says a race-to-the-bottom in taxes may not be a successful long-term strategy. He points to studies in Illinois that show every tax dollar spent on infrastructure has actually created $1.50 in economic activity.