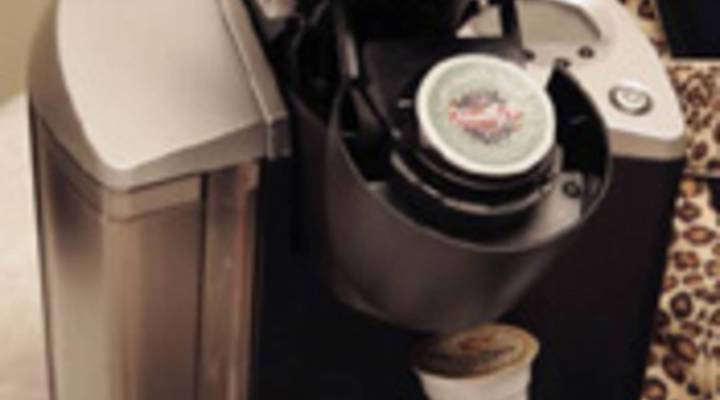 Starbucks and Green Mountain double up for single-serve

COPY
A single-cup gourmet brewer by Keurig is part the merchandise in the Grammy Gift Bag previewed on January 19, 2006 in Los Angeles, California. Vince Bucci/Getty Images
Food and Drink

Starbucks and Green Mountain double up for single-serve

Marketplace’s Stacey Vanek Smith reports those little cups could have a very big impact on the coffee business.

Stacey Vanek Smith: The deal means you’ll be able to get Starbucks French Roast or Tazo Passion tea in those adorable K-cups to brew at home in your single cup brewer, and you’ll be able to pick up one of those brewers along with your Venti caramel macchiato at Starbucks.

Green Mountain already controls most of the $4 billion single-serve coffee market. And Starbucks is, well, Starbucks.

The alliance comes at a good time, says Pirko. Coffee companies have been walloped by soaring bean prices — up nearly 50 percent in the last six months. That makes the highly profitable single servings all the more attractive.

Pirko: It’s a little bit like the printer business. What you really want to do is sell the cartridges. Once you’re able to get people into the fold by buying one of the machines, you make your money by selling as many of the pods as possible.

Green Mountain reportedly sells its $150 brewers at a loss. Not so for the K-cups; they cost almost $1 a piece. And there’s a lot of potential for growth. The single-serve market is doubling in size every year.