Kai Ryssdal: It’s not all that a big secret that foreign countries hire Washington lobbyists. Lobbyists dispense political advice and help deliver friendly legislation. But a lot of countries also hire PR firms, to develop ad campaigns that encourage investment and boost tourism. To spin some good stories about what goes on there, even if what goes on there isn’t always all that good.

Last year, a small country in North Africa needed some help. So Tunisia turned to the Washington Media Group.

From Washington, Marketplace’s David Gura has the story.

David Gura: So here I am in a sunny penthouse suite above the International Spy Museum. These are the offices of the Washington Media Group. Last year, the small PR firm inked a deal with Tunisia, a magnet for European beach goers.

Gregory Vistica: They had a high profile, obviously, in Europe — particularly France and Great Britain. But in the United States, it was, I mean, very, very, very low.

Vistica and his team of former reporters and political insiders thought Tunisia had a good story to tell.

Vistica: They wanted foreign direct investment in the country. They wanted tourism in their country. And they wanted people to be aware of their story.

Vistica says Tunisia was an American ally, and appeared moderate and open to doing business. So, the firm started to gin up buzz about the country. They put together what Vistica calls “a story bank.”

Vistica: It’s a bank of good potential stories, leads, tips, anecdotes, whatever that we can shape stories around. And we get those all done, and then, at the appropriate time, we can start laying those out for reporters and for the press.

Vistica was a producer for CBS News, and an investigative reporter for The New York Times. Today, he’s a PR man. Not a lobbyist, he tells me. Vistica says he doesn’t try to influence Congress directly, so he’s not registered. But as he describes what he does — from survey research to print and TV ad campaigns — I remember something James Thurber told me. He’s a public policy professor at American University.

James Thurber: I think that there are many more people in Washington D.C. that are in the advocacy business than are registered.

As many as 100,000 people, he says, and lots of them work for countries around the world. But even a former investigative reporter can do tons of due diligence and end up not knowing exactly what his firm is dealing with.

I asked Vistica if he was reluctant to take on Tunisia. After all, my own a quick web search turned up allegations of corruption and human rights violations.

Vistica: We had suspicions that there were issues with Tunisia. I mean, every country has, you know, has issues.

And those issues soon became very public. Last fall, WikiLeaks released hundreds of thousands of diplomatic cables. Some detailed how then-President Ben Ali spent wildly on mansions and yachts, how his family seized one of the country’s biggest banks.

Vistica: It confirmed for us suspicions that we had about the government and particularly the first family.

At tense meetings, the Washington Media Group talked over their game plan. Vistica turned to contacts around the world as the protests kept growing. Then, Ben Ali began losing his grip on power, and government forces started shooting unarmed civilians.

Vistica: And we just decided we couldn’t be a part of a government or support, or work for a government that was doing that. So that, for us, was the final straw.

The firm decided it couldn’t salvage Tunisia’s reputation. But it had to protect its own. The Washington Media Group broke its nearly half-million-dollar contract on January 6th.

Ryssdal: If you’d like to see the termination letter that the Washington Media Group sent the Tunisian government, click here. 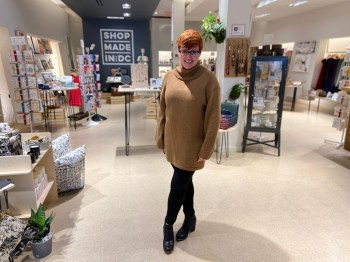 Washington clothing designers want a fashion industry for the capital