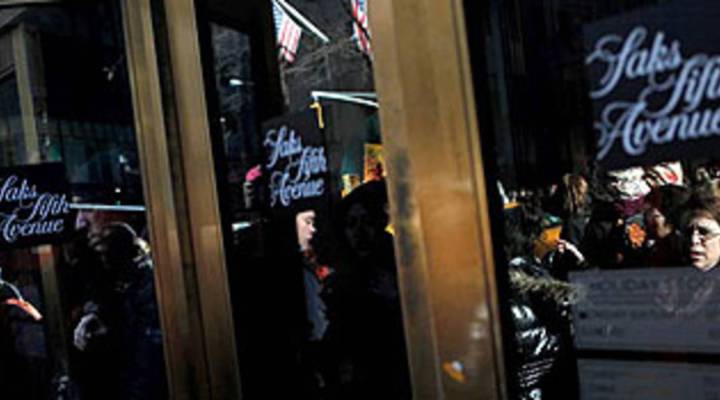 Kai Ryssdal: Lost in the geopolitical news from the Middle East this week has been corporate news from the bottom line. A lot of retailers have been reporting quarterly earnings. And there’s something of a trend shaping up.

Shoppers are putting on the Ritz, and not much else. High-end stores like Saks Fifth Avenue have been booming. Today Saks reported an 8.4 percent jump in sales. Meanwhile, discounters like T.J.Maxx and Marshalls have been struggling. Even Wal-Mart reported a drop in sales.

Stacey Vanek Smith: Consumer confidence is at its highest level in three years, but not all retailers are seeing the receipts to prove it.

Nancy Koehn is a retail historian at Harvard business school. She says although the economic downturn hit people of all income levels, the economic upturn has been selective.

Nancy Koehn: The economy is very quickly skewing into a small group of people that have disposable income, that are really feeling like they can go back to spending, and a much larger group of people in uncertain, choppy waters.

Koehn points out the stock market and corporate earnings have largely rebounded, and those tend to affect wealthier Americans. Meanwhile, home values and unemployment rates haven’t improved and that’s weighing on lower- and middle-income Americans. And Koehn says, those who are shopping are buying differently than they used to.

Koehn: More is not necessarily better. We are very thoughtful about what we’re buying.

Koehn says shoppers would rather spend a little more on something that will last. Luxury retail consultant Milton Pedraza says that has shoppers who can afford to, rushing back to luxury.

Milton Pedraza: The Louis Vuittons, the Guccis, the brands that have, yes, very expensive products on one end, but affordable luxury on the other, have proven that they are the sweet spot right now.

Pedraza says luxury buying often rebounds before broader consumer spending. He thinks that will be the case this time, too.