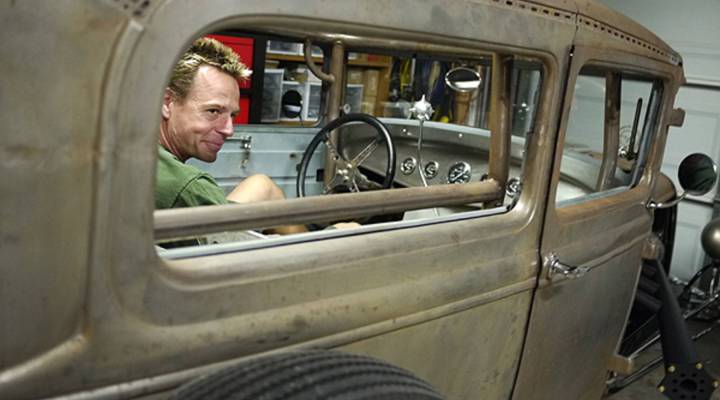 The psychology of why we hide purchases from our spouses

COPY
Tedd Keith sits in the latest car he bought and hid from his wife Mindi -- it's a 1931 Ford Model A Tudor. Josh Rogosin/Marketplace Money

The psychology of why we hide purchases from our spouses

Tedd Keith sits in the latest car he bought and hid from his wife Mindi -- it's a 1931 Ford Model A Tudor. Josh Rogosin/Marketplace Money
Listen Now

Tess Vigeland: And now for a segment we’ll call “Talk to Marketplace Money and we’ll make sure by the end you want a divorce attorney.” We’re going to talk about financial infidelity. Specifically spouses who hide purchases from each other. And before you judge, bear in mind that a recent survey from an outfit called CESI Debt Solutions found 80 percent of married respondents said they do this.

Now you’d think no one in their right mind would want to talk on national radio about it. But you’d be wrong.

Mary Barnes: This is our joint closet. However, my husband only comes on this side and I come way back in here so I do a lot of my hiding my stuff back here.

That is 40-year-old Mary Barnes of Redondo Beach, Calif. And she was taking us on a tour of hidden purchases in a medium-sized closet that she shares with 44-year-old Chris, her husband of eight years. He works in the pharmaceutical industry, she teaches preschool, they have two kids.

Mary is whispering a little ’cause Chris is right downstairs.

Mary Barnes: I was just at my favorite store over Christmas and I haven’t even pulled it out but I have some stuff here. So this stuff I haven’t even brought out yet.

She had a shopping bag of workout clothes in one hand. And then Mary pulled out a box that seemed like it would be hard to miss in such a tight space.

Mary Barnes: Well I got it before my husband got home. The clothes were up high so he didn’t see it. Honestly, I’m not really sure why this happens. I guess because things that I feel are important to me, he doesn’t necessarily feel are important and that we could spend that money somewhere else.

How much spending are we talking about here? About $300 worth. She received that money as a Christmas gift. But still felt compelled to hide the purchases she’d made with it. She says she feels judged. And guilty.

But surely Chris isn’t totally unaware that this is happening, right?

Chris Barnes: I don’t know if she actively hides them. It’s more like they’re hidden in plain sight. You know what I mean?

Indeed we do. But let’s hear that one more time and let him finish the thought.

Chris Barnes: I don’t know if she actively hides them. It’s more like they’re hidden in plain sight. You know what I mean? And my purchases are, too.

Wait, what? Yes, he hides purchases, too. Music, mostly.

Vigeland: Yes, but that’s been repealed.

Chris Barnes: That’s true exactly. I gotta get with the times.

Victoria Collins: Maybe it’s a little bit lying because you’re hiding it from ’em. Actually no, there isn’t a distinction. Lying and withholding the truth, but I think intent here is really important.

That’s Victoria Collins. She’s a psychologist who specializes in money and relationships. And we asked her to help explain why people who love and trust each other enough to get married would keep such seemingly trivial secrets.

In other words, we don’t want a spouse questioning every dollar we spend or making judgments about what we buy. We’re adults, right?
Collins also says some of the shopping guilt is self-created, based on what kind of spending culture we grew up with.

And in fact, Mary had an epiphany about her spendthrift father who just might also be a factor in her squirreling away of packages. So let’s hear what happens when we bring Chris and Mary back together in their condo.

Vigeland: All right, we are all back upstairs. I suppose this will be my Oprah moment. So what I gathered from my conversations with each of you separately, is Mary feels guilty when she makes purchases that she thinks you might not approve of. So she hides them. And you know, what we understand from you, Chris, is that you really wouldn’t care.

Chris Barnes: We obviously lack communication. I really don’t, because I trust you enough to know you’re going to make the right decisions.

Mary Barnes: I guess maybe sometimes the reason I hide it is because I already have something similar, and then I’ll buy something that’s very similar.

Vigeland: OK, I hear some judgment in there.

Chris Barnes: That’s a good point. This is a reckoning. I don’t think I do that. Because usually, I’ll notice something that’s new and just not say anything.

Mary Barnes: Really you do?

Chris Barnes: Yeah, don’t think I don’t see the Lucy box in the closet when I come home.

Now we realize that one couple does not a representative sample make. So here’s another marriage for us to tear assunder — two blocks away!

Mindi Keith: So a lot of times you know I’ll come in through the back and I’ll just throw it in my closet or it’ll get hung up right away, you know?

For the most part, it’s bags clothes we’re talking about — again. And why the sneaking around behind her husband’s back?

Mindi Keith: He’s never made a big deal about anything I’ve ever bought, but I almost feel bad just buying more stuff ’cause he knows how much stuff I have.

She does have multiple closets full already, but says she doesn’t need husband Tedd’s judgmental eye on those bags. And after 12 years of marriage…

Mindi Keith: I feel that if we both work, we are both entitled to buy whatever we want. As long as it doesn’t put the family in a crisis. I don’t feel like I have to tell my husband everything I buy.

And one thing we haven’t mentioned yet: Our couples both use the ‘yours, mine and ours’ approach to bank accounts. So they separate their money, yet still deal with issues of guilt and perceived disapproval.

And according to Tedd Keith, it is all perceived, not real.

Tedd Keith: She works hard, I don’t want to give her grief over that — I think she thinks I’d be a lot madder than I am.

And in fact Tedd has engaged in this behavior as well. He once parked a newly purchased car at a neighbor’s house for months before ‘fessing up and bringing it home. A car he bought with his own money.

Our money psychologist Victoria Collins says there is a solution to all this financial infidelity: Just talk.

Collins: One of the things that might be helpful to couples like this is to schedule a time each week and set a business meeting. A financial date night. During this one hour period of time, each one can say whatever they want and there’s no blame.

As we left Chris and Mary Barnes’ house, I wondered if that might be a starting point for them.

Vigeland: So what are you going to talk about at the dinner table tonight?

Funny how I don’t remember them thanking us for coming.

Of course, I’m kidding about the thank yous. It’s all good and they were great sports.