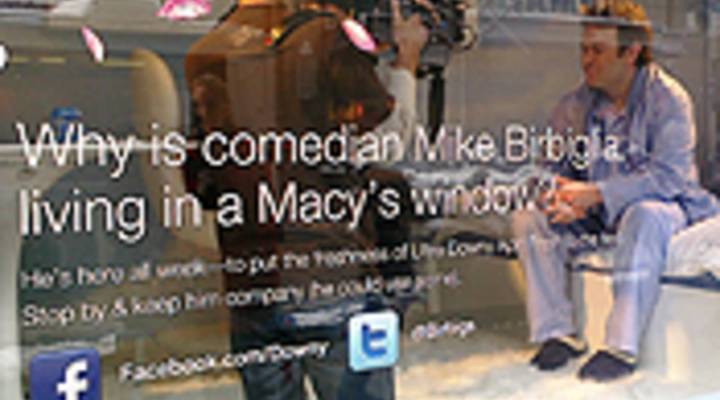 Kai Ryssdal: New Yorkers are a group about which this can safely be said — they’ve seen it all. Maybe twice. Which is why the scene outside Macy’s in Herald Square yesterday is worth noting. Presumably jaded passersby stopped to stare at an advertising stunt. A comedian named Mike Birbiglia will be living in a display window at Macy’s for an entire week. Eating, sleeping, playing XBox — that kind of thing. It’s a living, breathing ad for Macy’s and Downy fabric softener.

Mike Birbiglia: I’m the worst sleeper in America. And as a result, I’m the face of the Clean Sheet Week Challenge.

Vanek Smith: This is like a first New York apartment size.

Birbiglia: It is. That’s exactly what it is. Look at these crazy people waving at me.

Birbiglia may be bad at sleeping, but he’s a great at social media. And that’s a big part of this campaign — Birbiglia is answering questions online and blogging.

Birbiglia: I’m tweeting and I’m on Facebook. The whole of my responsibility is to just kind of react to what is happening.

The comedian has 57,000 followers on Twitter and 34,000 Facebook fans. Thanks to him and his sleep problems, Downy’s social media presence has taken off overnight.

Sarah Pasquinucci: We’ve grown our fanbase on Facebook more than we ever hoped.

Since they announced the campaign, Downy’s doubled its Facebook fanbase to more than 100,000. More and more traditional companies are starting to invest in this kind of advertising, says Josh Bernoff, author of social marketing book “Groundswell.”

Josh Bernoff: When they succeed, they’re quite cost-effective. You can get your own customers to actually be the ones spreading your messages.

This is about more than building brand awareness. Consultant Shel Holtz points out that if people want to check out what Birbiglia is doing, they have to go to Downy’s Facebook page and push the “Like” button. That not only gives Downy a slew of personal information about the consumer, it flags that person to receive online ads from Downy.

Shel Holtz: That gives you a channel through which you can be made aware of specials and offers and discounts.

One day in, 15,000 people have “Liked” Downy’s “Mike in the Window” campaign. And outside of Macy’s, it’s getting attention, too. Shakena Mitchell stopped to check out the display.

Shakena Mitchell: I saw him in the window and I was just wondering what was going on.

Vanek Smith: Are you going to check him out online?

Mitchell: Yeah, I’m going to tell people about this. They’re going to be like, “You’re lying.” I’m like, “No for real, he’s in the window.” I’m posting this on my Facebook.