Kai Ryssdal: If the powers that be at Marketplace would only agree to rig up a studio in my garage, I’d be all set. I wouldn’t ever have to set foot in the friendly confines of the Frank Stanton Studios ever again.

But my issues aside, technology has made telecommuting pretty easy. Tens of millions of people work from home at least once in a while. For years, we’ve been told that avoiding the drive into the office is a bonus for the environment. Turns out, like so many other things, it’s just not that easy.

From the Marketplace Sustainability desk, Adriene Hill has the story.

Adriene Hill: This was supposed to be a story answering a pretty simple question: Does telecommuting make sense for the environment? The easy answer is not always. But the real answer is much, much more complicated.

Forrest’s an administrative assistant for a psychotherapist. She handles most of the paperwork, phone calls and scheduling from her home.

Forrest: I have an open hour…

She makes the 43-mile roundtrip drive to the office only once a week. And all those driving miles saved make Forrest’s setup seem like an environmental slam dunk — except it’s been cold in Atlanta this winter and Forrest’s furnace is old.

Forrest: Every time that I have a technician service it, he kind of stumbles out of the basement and says, “Lady, I never saw a furnace that old.”

That old furnace from the 1920s is really inefficient, and she wouldn’t use it if she was out of the house.

Patricia Mokhtarian: It’s quite possible to generate more energy from the building standpoint by telecommuting, than you save.

Patricia Mokhtarian is a professor at the University of California Davis. Mokhtarian says the environmental calculation for each person that chooses to work from home will be different, depending on driving habits, infrastructure and geography. For example. telecommuters in temperate Los Angeles need less energy for heat in the winter than folks in Chicago.

Mokhtarian: And of course, you want to look at the next step back and ask, “Where does the energy come from?” In a region where the energy is largely coal, then you could be talking about more emissions in the long run than obviously in a place with cleaner energy.

Is your head spinning yet? There are other factors to consider before feeling all environmentally virtuous about staying home — new computers, furniture, lighting, clothing, food.

Researchers at Cal Berkeley created a formula (PDF) to analyze the impact of working at home. Here’s just a part of the calculation:

And on and on. Even situations that seem bad for the environment, clearly bad, are hard to sort out.

Amanda Hickman: I am either on the phone or in front of the computer or both, all day long.

Amanda Hickman works out of her home in Brooklyn. She used to bike to work, so telecommuting doesn’t save any gasoline. And now, instead of going into an office, she heats her drafty brownstone.

But — and here’s the but — there’s no office for Hickman not to go to. So there’s no duplicate desk being wasted, or heat being wasted, there aren’t extra computers or phones. And so again, it’s complicated. Lame, I know.

But there are simpler answers for the ecologically minded that start with simpler questions: How do you use energy? Can you cut that down? According to the federal government, three-quarters of us, when we do go into work, drive in our cars all alone. And so, for three-quarters of us, the solution could be as simple as sharing a ride. 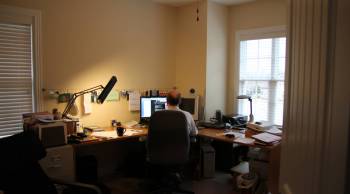 More people than ever are working from home 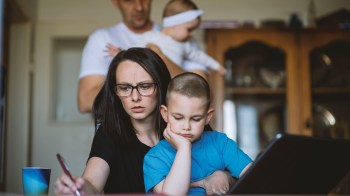 Maps - Electricity
Tags in this Story
Share this Story