Google surprised Wall Street and Silicon Valley yesterday with the news that co-founder Larry Page will take over as the company’s new CEO.

Two companies are currently in a legal battle that could dramatically alter the way publicly traded companies change hands in the U.S. One company is using the “poison pill” tactic, which increases the number of shares to make a takeover prohibitively expensive

Canada — home to two-thirds of the total polar bear population left on earth — is debating putting the species on an at-risk list. That would mean trying to place an economic value on the animal.

President Obama is expected to name GE CEO and chairman Jeffrey Immelt head a new advisory council — the Council on Jobs and Competitiveness.

China announced a 10.3 percent growth in their economy of 2010 — that’s three times faster than the U.S.

European officials are investigating the disappearance of around 2 million carbon credits. The theft has disrupted Europe’s $120 billion-a-year market to trade pollution credits.

Little black and white squares have started popping up in magazines, on billboards and storefronts. They’re called QR codes, and are aimed at linking the online world with the real world.

This week was dominated by CEO-turnover news. First Steve Jobs announce his medical leave of absence from Apple, next we had news from HP. Google’s Eric Schmidt announced today that co-founder Larry Page will be in the next CEO of the search-giant. Jill Schelsinger speaks with Steve Chiotakis about the value of the CEO, and what turnover means for a company. 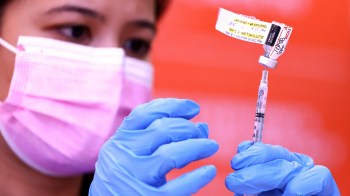