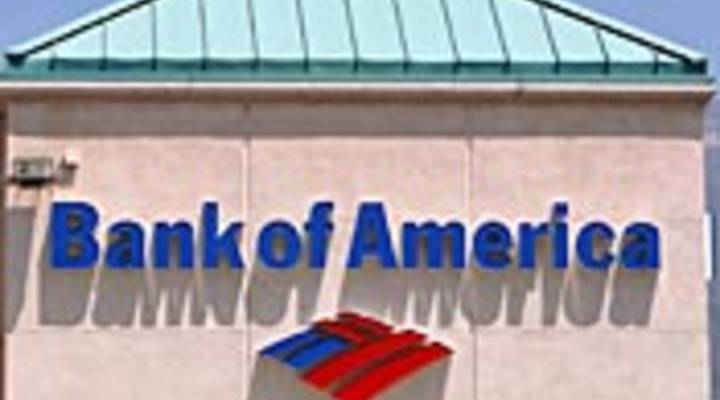 Kai Ryssdal: You might want to look over your next bank statement more closely than usual, because as banks lose the ability to charge certain fees for you using your plastic, they’re getting serious about making money from your checking account.

Bank of America’s going to start testing a new fee system. A choice of four account types based on things like how much money customers keep at the bank, and how much money they’re not costing the bank. Marketplace’s Stacey Vanek-Smith explains.

Stacey Vanek Smith: Bank of America’s plan divides customers into four groups and charges them monthly fees based on how much money and how many accounts they have with the bank. Here’s B of A spokeswoman Ann Pace.

Ann Pace: We’re really trying to offer customers more choices in how they can bank with us and then more ways for customers to pay for those.

“Those” fees range from $6 to $25 a month. Customers can avoid them if they have at least $50,000 with the bank, or by doing their banking in certain ways.

Bart Narter is a banking analyst with Celent. He says B of A is trying to encourage customers to do all of their banking online or at an ATM. Basically, paying them to stay out of the branches.

Narter: If they’ll train you to make your deposit in the ATM, which costs them less money than having you walk up and deal with a person, they’ll reward you for that by not charging you a monthly fee.

B of A, Citigroup, Wells Fargo and others are trying new cost-cutting and money making tactics, says Ken Thomas, who teaches finance at Wharton. He says they’re trying to make up for revenue they’ll lose because of new regulations that restrict formerly lucrative fees.

Ken Thomas: Billions of dollars of fees — overdraft fees, all the credit and debit fees that they used to get — they’re not going to get those any more. And this is where they’re going to start making it up.

That could be tough. Thanks to regulation, banks stand to bring in $12 billion less in fees than they did last year.